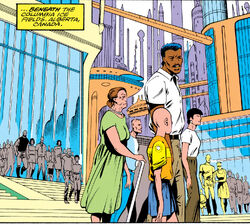 The city of Freehold was established by the Leader in the Columbia Ice Fields of Alberta. The Leader populated his city with scientists, thinkers, radiation victims and Gamma Mutates. His plan was to create a society that could survive any apocalypse and emerge to rule the earth. Freehold was attacked at one point by Hydra but saved by Hulk (Bruce Banner). During the battle, the Hulk decided to eliminate the Leader as a threat and the Leader was apparently killed.

The Leader's chief assistant, Omnibus, was elected to replace the Leader. Unknown to anyone else, the Leader controls Omnibus. The Leader (through Omnibus) later created a fictional terrorist group, the “Alliance” which wreaked world-wide havoc. The Leader hoped to bring about a war that would ravage the outside world.

The citizens of Freehold discovered the plans of "Omnibus" and put him on trial. Omnibus refuses to accept the ruling of the council, claiming only he has the vision to lead. Omnibus was exiled to the arctic circle where he was apparently killed by a polar bear.

The city was conquered by the Troyjans in an attempt by Armageddon to resurrect his dead Trauma. When the machine failed, the Troyjans seemed to leave.[1]

Like this? Let us know!
Retrieved from "https://marvel.fandom.com/wiki/Freehold?oldid=5803231"
Community content is available under CC-BY-SA unless otherwise noted.