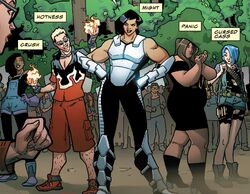 The Freelancers were a group of superpowered security contractors hired by Roxxon to shut down the protesters at the Angeles National Forest that opposed the company's intention to build a pipeline that connected their West Coast headquarters to a new deep-water drilling platform off the coast.

The confrontation between the Freelancers and the Champions was abruptly interrupted when two monsters originating from the Leviathon Tide landed on the forest, knocking down Hotness in the process, and prompting both teams to work together to stop the creatures. Might and Crush proved essential to defeat a molten creature. The Freelancers remained behind while the Champions hurried to subdue a monster that had landed on the coast, which coincidentally destroyed the drilling platform the pipeline was going to be used for, potentially leaving the Freelancers without a paycheck.[1]

The Freelancers were later hired for other jobs, including disrupting a wage protest in Durham, North Carolina and displacing homeless people from a tent city in Los Angeles, California. The Freelancers invited two of the homeless people they displaced to their compound, and manipulated them into fighting each other, later using Panic's powers to have them tell the authorities that the Champions had assaulted them.[2]

Like this? Let us know!
Retrieved from "https://marvel.fandom.com/wiki/Freelancers_(Earth-616)?oldid=5547007"
Community content is available under CC-BY-SA unless otherwise noted.