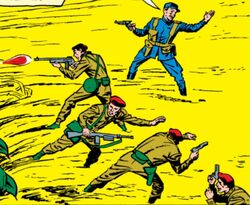 The French Army (Armée de Terre) is the land-based component of the French Armed Forces. It is itself composed of various corps, the most famous among them being the French Foreign Legion (Légion Étrangère), a corps allowing to foreign citizens to join, and eventually became French citizens.

Like this? Let us know!
Retrieved from "https://marvel.fandom.com/wiki/French_Army_(Earth-616)?oldid=5839453"
Community content is available under CC-BY-SA unless otherwise noted.