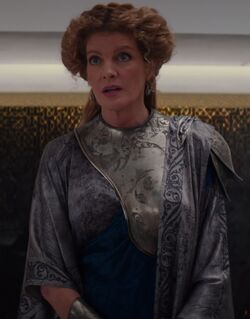 He kept the truth from you so you would never feel different. You are our son, Loki, and we your family.

Frigga was an Asgardian married to Odin, the ruler of Asgard. She raised two sons; Thor, the child she bore, and Loki, the child Odin brought back with him from Jotunheim. Always placing a high value on her familial relationships, she was present at Odin's side when Laufey entered Odin's bedchamber to assassinate the slumbering king. She attacked Laufey's henchman, killing him in a single strike, but the more experienced Laufey quickly overpowered her and tossed her away, leaving her helpless to protect her husband any further. Fortunately for Odin, Loki chose that moment to strike, killing the intruder instead.

Frigga's two sons were drawn into a bitter fight as a result of Loki's machinations, and Frigga suffered a great loss when Loki apparently perished. Her sadness was deepened further in watching Thor's torment, both at his inability to save his brother and the choice he had made to save a world at the cost of severing contact with his love still on Earth.[2]

Following Loki's attack on Earth and his subsequent imprisonment, Frigga constantly visited her foster son in prison, providing him with reading material and trying to reassure him that she still loved him. When Jane Foster was brought to Asgard after being possessed by the Aether, Frigga took care of her, but when the Dark Elves attacked, Frigga fought to the death to prevent Malekith and Algrim from claiming her. Her death inspired Thor and Loki to work together to stop Malekith, Thor recognizing that Frigga's death was the one catalyst that could get Loki working with him.[3]

Like this? Let us know!
Retrieved from "https://marvel.fandom.com/wiki/Frigga_(Earth-199999)?oldid=6074008"
Community content is available under CC-BY-SA unless otherwise noted.