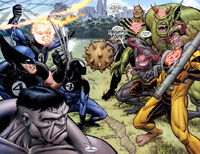 After learning that the original Fantastic Four had been killed off and that a new team had been assembled, Doctor Doom wanted revenge for being cheated out of destroying the Fantastic Four. Partner with Mephisto, Doom created his own Frightful Four consisting of Sabretooth, Sandman, Venom, and Abomination. The four villains were further augmented with demonic energy from Mephisto. The Frightful Four were then pitted against the new Fantastic Four but were eventually betrayed and actually disintegrated, simply being nothing more than disposal pawns in Mephisto's scheme to destroy the Fantastic Four.[1]

Retrieved from "https://marvel.fandom.com/wiki/Frightful_Four_(Earth-808122)?oldid=5547046"
Community content is available under CC-BY-SA unless otherwise noted.