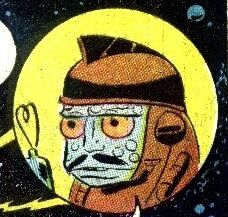 The Frogmen are a unique of amphibious aliens that are unique to the Earth-5106 universe. Not much is known about their race. A group of renegade Frogmen led by Ud were hired by Edgar Revere in another attempt to try and discredit his rival, Space Squadron commander Jet Dixon after tricking Jet and his colleagues into undergoing a test of an experimental gas created by Dr. Kalandra. To this end, Edgar gave the Frogmen highly lethal "Atomic Dust" to attack the Earth. However, a side effect of the gas that the Space Squadron were exposed to caused them to randomly teleport to various locations in the solar system, coincidentally appearing just as Edgar was handing over the Atomic Dust. The Frogmen were easily defeated and put into custody[1].

The Frogmen have advanced technology and are capable of interplanetary flight.

Like this? Let us know!
Retrieved from "https://marvel.fandom.com/wiki/Frogmen?oldid=4234385"
Community content is available under CC-BY-SA unless otherwise noted.