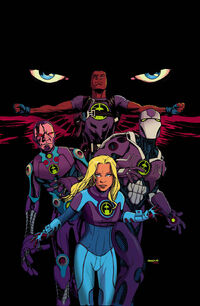 The Future Foundation was a team of Earth's biggest minds brought together to help humankind, inspired on the concept of the defunct Fantastic Four.[1] It was founded by Tony Stark, and led by Sue Storm and Phil Coulson.[2]

After some incidents in which rips in the time-space continuum brought inhabitants from other universes,[3] the Future Foundation was visited by the inhabitant of a universe who had escaped before its destruction, Miles Morhames, Spider-Ham,[4] who revealed them that for their universe to survive, Sue Storm had to have a child with Reed Richards.[5] Sue visited Reed in order to comply with Spider-Ham's suggestion, but he convinced her to find another way.

They stole genetic material from a S.H.I.E.L.D. lab, and Reed fecunded Sue with the child of Ben Grimm. Months laters, the rips appeared more often, and Sue entered in labor. At that time, a rip brought evil cyclops versions of heroes from another universe, who began to rampage through New York, but when the baby was finally delivered, the girl created an energy emmanation which closed the portal and pulled back those who came from it, fixing the decaying universe.[6]

Retrieved from "https://marvel.fandom.com/wiki/Future_Foundation_(Earth-1610)?oldid=5547487"
Community content is available under CC-BY-SA unless otherwise noted.