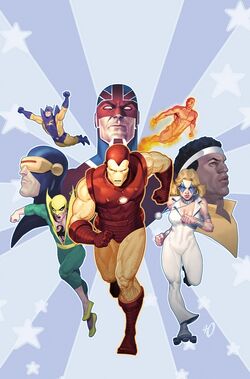 Base of Operations
Unlocated underwater Donald Birch's base
Affiliations

This team was formed by Iron Man from the future of various heroes from the past including Dazzler (Alison Blaire), Iron Fist (Daniel Rand), Cyclops (Scott Summers), Power Man (Luke Cage), Yellowjacket (Henry Pym), Human Torch (Johnny Storm) and Captain Britain (Brian Braddock), banded together for saving the present from the menace of Donald Brich, who was intending to unleash the Dark Phoenix on Earth, as he had already done on that Iron Man's world.[1]

Retrieved from "https://marvel.fandom.com/wiki/Future_Iron_Man%27s_Team_(Earth-616)?oldid=3543968"
Community content is available under CC-BY-SA unless otherwise noted.