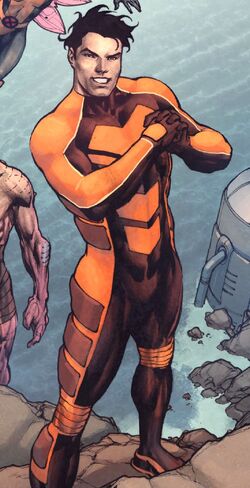 Because let's be honest...When we look this good, how can we fail?

Gabriel Cohuelo grew up in the home of his wealthy parents in Mexico City, Mexico. As he was preparing to complete his high school education and move away to a university, his mutant powers activated.[2] He was located by the X-Men using Cerebra.[3] The X-Men sent Psylocke and Dr. Cecilia Reyes to investigate. Gabriel was moving at such a fast rate that he could not even be seen by the naked eye, although Psylocke was still able to telepathically sense his presence.[2]

After saving Laurie, Hope Summers, Rogue, and the others headed to Mexico City. Once there, Hope was able to stabilize Gabriel's power similar to how she stabilized Laurie's powers. Like Laurie, Gabriel was shocked by the manifestation of his mutant powers and was completely willing to follow Hope.[2]

Gabriel joined Hope as she continued to rescue the other Lights. They team traveled to Nigeria to save Idie,[4] then across Europe and finally to Florida while tracking Teon.[5] Later the group traveled to Tokyo, Japan to stop Kenji's rampage. Gabriel was the first to side with Hope in her decision to ignore Cyclops' orders, and assisted in saving Kenji. During the melee he was even able to save Hope when she fell.[6]

Once the Lights arrived on Utopia, Doctor Nemesis' tests revealed that Gabriel was actually a time-manipulator not a speedster as he assumed.[1] Gabriel's crush on Hope continued to blossom, and Hope even initiated a "thank you for saving my life" kiss.[7] Gabriel continued to be very enthusiastic about following Hope and becoming a superhero.[7]

While still settling into life on Utopia, and experimenting with their powers, the Lights were called to their first mission: investigating a new mutant manifestation in Berlin.[8] Gabriel in particular was excited for their first mission as a team. Although they encountered some setbacks, the team was able to pull together, convinced the Sixth Light to be born, stabilized his powers, and saved Berlin from his mind control.[9]

When the team arrived back from Germany, they were greeted by the news that the Macik's wanted their son Teon back. While awaiting the trial and in an effort to distract her team from the looming legal proceedings, Hope insisted on adopting codenames. Gabriel adopted the name "Velocidad", Spanish for speed.[10]

After the events in Germany and Teon's trial, Gabriel and the team continued to train and prepare for more new mutant activations around the world. Thanks to the Stepford Cuckoos monitoring in Cerebra, Hope and the Lights were alerted almost immediately of the activation of the Seventh Light's powers. They left quickly, but arrived just after Zee had committed suicide. The whole team took the death very hard.[11]

After the events of Schism, Gabriel found his leg injured. He was visited by Pixie, who needed help with her pain pills. The two flirted and ended up making out. Hope walked in on them and was infuriated by Gabriel cheating on her; Pixie was no less angered, slapping him and calling him a tosser. Gabriel later confessed to Kenji that he knew his powers were making him age at a hyper-accelerated rate, and he wanted to live his life before it was gone. Pixie was convinced by Hope to join the team, and she also had Teon poop on Gabriel's bed.[12]

Getting anxious to find a new mutant, Hope misinterpreted a light near the Chinese border of Pakistan as a new mutant manifestation. Hope assembled her team, but when they arrived they found an amnesiac Sebastian Shaw strapped to a suicide bomb.[13] The team narrowly escaped with Shaw from Jin Billion and his Butchers.[14]

Shaw's return to Utopia caused high tensions. While Emma and Cyclops debated the fate of Shaw, several former Morlocks confronted the Lights. To end the feuding, Hope forcibly took control of and pushed Zero's powers to their limits without his permission and much to his disapproval.[15]

While Hope studied the information about Shaw's past given to her by Cyclops, Zero began to finalize his plans to betray and murder Hope.[16] For weeks Zero had been telepathically and subtly turning Utopians against Hope. As mind-controlled mutants converged on Hope, Gabriel and the remaining Lights came to her aid. The Lights fought off the other mutants as Hope and No-Girl combined their powers to kill Zero.[17]

During a debriefing session, Shaw was fully inducted and the group reconciled some of the problems they had been facing.[17]

When the Avengers arrived enforce on Utopia to take Hope into custody before the arrival of the Phoenix, Cyclops and the X-Men forcibly tried to stop them. During the melee, Hope escaped, but the Lights and young X-Men were left behind as Cyclops and many of his X-Men fled. Not wanting the younger X-Men to join the war, the Avengers decided to quarantine them at the Avengers Compound with the Avengers Academy.[18] However, the teenage mutants didn't want to remain in custody, and were eventually allowed to leave.[19] The Lights returned to Utopia in search of Hope,[20] but when they couldn't find her they joined the other young mutants in Westchester at the Jean Grey School For Higher Learning.[21]

The Lights were functionally disbanded with the departure of Hope and the enrolment of the remaining members into the Jean Grey School.[21]

When most of the X-Men were killed on Quadra Island, Gabriel joined the Morlocks with a few other mutants.[22] Later, he was detained and forced to use his powers for O*N*E, which caused him to age rapidly. They merged him with Warlock to keep him alive while they continued to exploit his abilities. When Wolverine ultimately found him, Gabe asked him to kill him, so Logan mercifully ended his life.[23]

Gabriel is one of post-M-Day mutant activations. His powers include:

That status of post-M-Day activated mutant gave him also the following characteristic:

Like this? Let us know!
Retrieved from "https://marvel.fandom.com/wiki/Gabriel_Cohuelo_(Earth-616)?oldid=6485364"
Community content is available under CC-BY-SA unless otherwise noted.