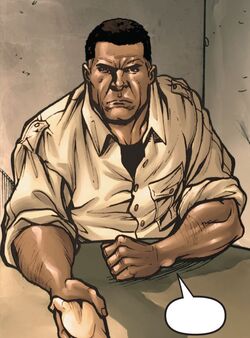 Ya know, it's a funny thing... but Aryan heads smack together with the same sound as non-Aryan ones! There's probably a moral there somewhere, if I could just figure it out! Oh, well...

Army Intelligence took note of both men joining the war effort. Jones' interest in music gained the attention of the top brass and the Army sent him to a high specialty school where he became an expert in German classical music.

Despite segregation in the armed forces, Jones found himself handpicked by Captain "Happy" Sam Sawyer to enlist in the First Attack Squad, aka the famous Howling Commandos lead by Nick Fury. Jones distinguished himself both with the music of machine guns and his handy trumpet, which he used to jazz countless Howler parties in the barracks and to unusual and effective use in battle.

After training, the unit was dispatched back behind enemy lines in France to recover a Free French resistance fighter who was captured by Nazi soldiers. This was a vital rescue mission since they knew the date and time of an impending Allied landing on the beaches of Normandy. With the help of Free French resistance fighters they rescued the man from the Nazis before he could be forced to talk.[2]

With the Howlers, Jones faced some of the Nazi's worst menaces, including Baron Zemo,[3] Baron Wolfgang von Strucker,[4][5] and Colonel Klaue. The Howling Commandos were so feared by the Third Reich, a counter squad of elite fighters, the Blitzkrieg Squad was formed, and among their number, the flute-playing machine gunner, Otto, was designated Gabe Jones' nemesis.

Jones and the Howlers were among the first soldiers to see Captain America in action overseas. After the Captain helped the Commandos to destroy an experimental Nazi rocket lab, they were assigned to help him find out why a Nazi invasion force was sent to the African nation of Wakanda.[6] Here Jones and the Howlers helped to protect Wakanda from the Red Skull and his force of superhuman Nazi operatives. Jones actually shot the Armless Tiger Man dead when he saw the villain threaten the lives of the Wakandan princes T'Chaka and S'Yan, prompting the Black Panther to offer him citizenship in the African nation.[7] While in Wakanda, Nick Fury asked Jones to undertake a top-secret mission to acquire some Vibranium for the U.S. Military.[8] Though Jones did get the Vibranium, he could not betray the trust of the Black Panther and denied having completed his mission to Fury.[7]

Jones was reunited with his old band mate, Danny Bellaman near the end of the war under less then happy circumstances; selected to find his old friend who was holding a Nazi virus. Held as a POW, Bellerman escaped with the virus but rather then let either side take it, Bellerman swallowed the formula and when Jones found him was already dying.

Jones was engaged to marry Carla Williams, whom he had met during World War II when she was performing as a nightclub singer under the name Carla Swain. Jones was assigned to rescue her from Nazi-occupied Paris, and he and the Howlers saved her life from a Nazi officer.

Following World War II Jones presumably continued his career as a jazz musician until he reenlisted for the Korean War, once again seeing combat as a Howling Commando with his former teammates.

After the Korean War, its unclear what Jones was doing just prior to joining S.H.I.E.L.D., however once he was in, Jones became one of Fury's closest aides, assisting him in running the entire organization and acting as an operative on major missions. Jones' most celebrated solo assignment was his infiltration of the first subversive organization known as the Secret Empire, which he succeeded in defeating from within. Jones served at the front lines of many of S.H.I.E.L.D.'s early battles with the likes of Hydra, A.I.M., the Maggia, the villainous duo of Mentallo and the Fixer, and many other foes. Jones also came to know many of the world's heroes, including the Fantastic Four, Iron Man and of course Captain America, whom he first met during World War II.[9]

For a time Jones was also romantically involved with Peggy Carter, a former member of the French Resistance. Having met during the war, Carter and Jones were reunited when both served as S.H.I.E.L.D. agents in the 1970's.[10]

As the decade wore on, Jones was placed on special assignment with Dum Dum Dugan and Jimmy Woo aboard the Helicarrier Behemoth IV to retrieve and capture the creature known as Godzilla. Jones was second-in-command of the task force named 'Godzilla Strike Force', a job he performed with considerable reluctance as he personally felt a less aggressive strategy was needed to stop the giant creature. Jones was pleased to see Godzilla return to the sea unharmed.[11]

He rejoined S.H.I.E.L.D. in 1990 in order to help train the new crop of recruits as a favor to Nick Fury. The first graduating class of 1,500 agents were massacred by a Hydra surprise attack which Jones witnessed from the Helicarrier. Jones then stayed on through the final battle with Strucker, settling into retirement in Iceland afterwards yet again. Jones was among those present at Fury's 'funeral' along with former S.H.I.E.L.D. and Howling Commando teammates.

Following the dissolution of S.H.I.E.L.D. after the Secret Invasion, Jones joined Howling Commandos (PMC), a private military company consisting of former S.H.I.E.L.D. agents. Along with his longtime comrade Eric Koenig, he was killed in action against the forces of Hydra, decapitated by the Gorgon.[12]

Gabe Jones was a good hand-to-hand combatant in his prime. He was an excellent marksman with a rifle. Jones had considerable knowledge of commando tactics. He was highly skilled in espionage and in the infiltration of enemy organizations.[13][14][15][16]

Gabe Jones possessed the normal human strength of a man of his age, height, and build who engages in intensive regular exercise.[13][14][15][16]

Like this? Let us know!
Retrieved from "https://marvel.fandom.com/wiki/Gabriel_Jones_(Earth-616)?oldid=6505411"
Community content is available under CC-BY-SA unless otherwise noted.