Having acted as Magneto's attorney, it can be inferred she graduated Law School at some point.

Gabrielle Haller was a catatonic Holocaust survivor, the doctor of the death camp in which she was held was Mister Sinister.[1] She was awakened from her catatonic state after Charles Xavier used his powers to make her aware again. Gabby and Charles fell in love while he saw to her recovery for weeks, with the help of hospital volunteer and their mutual friend, Magnus (the future Magneto). When she was kidnapped by the terrorist organization, HYDRA led by the Nazi Baron Strucker, Charles and Magnus used their mutant powers to save her and defeat the HYDRA soldiers. Immediately afterwards, Magnus left Gabby and Charles feeling that he and Charles' view on mutants and humans contrasted his own. Magnus left with Nazi gold that HYDRA wanted to claim.[3]

Over some time, the two amicably ended their relationship. Soon after, Charles left Israel unaware that Gabrielle was pregnant. Years later, Gabrielle became the Israeli ambassador to Great Britain living in Paris with her young son, David. During a terrorist attack at her home claiming the life of David's stepfather, Daniel Shomron, David's mutant powers activated, ending with him killing the terrorists and putting himself in a catatonic state.[4]

Later, David in his late teens, became autistic, concerning his mother, thinking it was a symptom of something more serious. Gabrielle did everything she could, but she turned to Dr. Moira MacTaggert for help. She told Moira that Xavier was David’s father and that she didn’t want him involved. Unfortunately, David's powers began to manifest uncontrollably, absorbing the psyches of two of MacTaggert's friends, Tom Corsi and Sharon Friedlander. Moira had no choice but to call Xavier to help who is assisted by some of the New Mutants. When David absorbed Moira's and Wolfsbane's psyches into his mind, Xavier and Dani used their powers to enter it as well. It is here that Xavier apparently discovered he was David's father.[4] 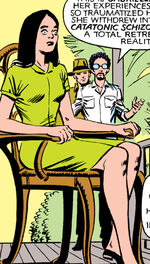 Gabrielle and Cypher were also absorbed and meet David's various personalities, including those of the absorbed psyche of the terrorist leader who raided his home. Eventually Dani and David's personalities returned everybody to their bodies, fixing most of David's mind and ridding him of his autism. Despite Gabby's secrecy, Xavier did his best to help raise David.[4]

Later, Gabrielle became Magneto's attorney, while on trial for crimes against humanity. The trial was halted when Baron Strucker's mutant twin children, collectively named Fenris, attacked the proceedings seeking revenge against her, Xavier, and Magneto for their father's death. After Xavier and Magneto defeated them, Magneto did not return to the courtroom.[5]

Gabrielle lost David because of Bishop from an alternate timeline known as the Age of Apocalypse after he created said timeline when he accidentally killed his father. Bishop in the AoA timeline prevented this from happening by killing David.[6]

Deeply saddened by the loss of her son, Gabrielle eventually moved on with her life. She continued work as the Israeli ambassador. She along with the mutant hero, Sabra, attempted to find out Magneto's true identity, but failed after he killed the forger who gave him the "Erik Magnus Lehnsherr" name. She was also part of the United Nations decision to give the island nation of Genosha to Magneto, after he demanded an entire mutants-only nation.[7][8][9]

When Stephen Lang and Bolivar proposed to the United Nations the concept of the Mutant Response Division, Gabrielle opposed the proposition, citing the failure of the Sentinel Program. The task-force was assembled anyway.[10]

After her son David caused trouble across Britain, Pete Wisdom called Gabrielle to have a word with him. However, the car she sent found David gone with co-ordinates carved into the wall of his cell. Following them, Gabrielle went to Muir Island where she had her first encounter with David after many years. Discussing the Age of X that David had created, he questioned her on why the guardian persona his mind manifested was Moira McTaggart and not her. It was then that she admitted to him that David was a part of his father's world, one of heroes and villains, superpowers and insanity that she couldn't understand. Unfortunately, she was soon shot by mistake by an Aqiri superhero whose president held a grudge against David.[11]

Bleeding out, David searched his mind frantically for a healing power, but Gabrielle told him to stop. That in her world there was no easy fix, that people didn't come back by miracles before passing away. David quickly incinerated the killers before teleporting to the Jean Grey School.[11]

She was later resurrected by her son.[12]