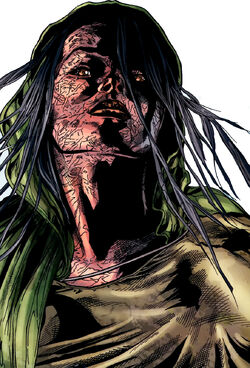 Hundreds of years in the future, Earth had become virtually unsustainable for human life. The surviving super-heroes of Earth, Susan Richards and the new Defenders, planned to teleport the billions of remaining humans back in time to thrive on a younger, more vital Earth. They arrived on NuEarth in the early 21st century, but their departure was devastating to Gaea, the spirit of the Earth in their own time.

Gaea was intimately connected to the lifeforce of the planet and the people on it. Suddenly losing billions of her children drove her insane, and Gaea pursued humanity back in time to take her revenge. The Defenders, now called Fantastic Force, confronted Gaea and her avatars on NuEarth.[1]

Seemingly those of Gaea of Earth-616

Seemingly those of Gaea of Earth-616

Like this? Let us know!
Retrieved from "https://marvel.fandom.com/wiki/Gaea_(Earth-807128)?oldid=5744977"
Community content is available under CC-BY-SA unless otherwise noted.