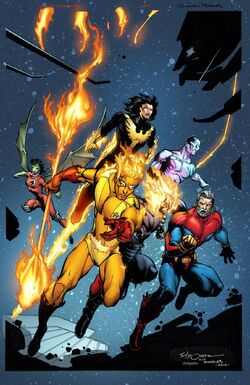 When Martinex left the Guardians of the Galaxy, he did so with a dream to have the Guardians be a true galactic force. After the Intimidators used the Ultra-Max computer virus to revive Korvac, he found his opportunity and recruited former Guardians and reserve Guardians to his cause.

They were later summoned to aid the Guardians of the Galaxy in their fight against the dread Dormammu, but were headed off by Bubonicus en route. After defeating him, they arrived just in time to see the Guardian's ship, Drydock, get destroyed. After rescuing them, the Guardians and the Galactic Guardians fought Dormammu until the Sorcerer Supreme of the age, Krugarr, could arrive and, after the death of the Ancient One, trap Dormammu again in the Dark Dimension.

When the threat of the Ubiquitor threatened to destroy all of reality, it was the Galactic Guardians that defeated her and her agents. Though not able to defeat her alone, the Phoenix received help in the form of Woden, son of Thor, who gave Phoenix the use of Mjolnir. It found Giraud worthy and together they struck her down.

At need. They exist on Mainframe's world.

Retrieved from "https://marvel.fandom.com/wiki/Galactic_Guardians_(Earth-691)?oldid=5547098"
Community content is available under CC-BY-SA unless otherwise noted.