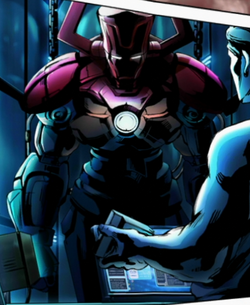 The Galactus-Buster armor was built by Tony Stark of Earth-30847 after the defeat of Galactus. Using data gained from his battle, he realized he barely defeated the cosmic entity. Being pretty lax with armor modifications, he began construction on the armor afterwards.[1]

Retrieved from "https://marvel.fandom.com/wiki/Galactus-Buster_Armor?oldid=6082563"
Community content is available under CC-BY-SA unless otherwise noted.