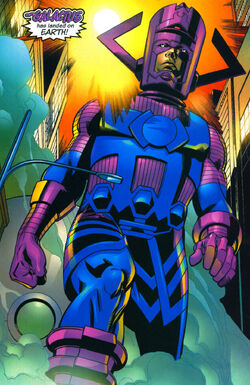 When Captain America died and became a star, Galactus planned on using him to transcend his hunger. Galactus gathered great stores of energy as well as gods and artifacts, which he planned to use to create a new universe where he would ascend and be free his hunger, using the detonation of the Earth combined with the power he had captured and the implosion of the Captain America star to initiate a new Big Bang. He was ultimately defeated by Spider-Girl, American Dream, and Stinger and then merged with the Silver Surfer, becoming a builder of worlds and guardian of life instead of a destroyer.[4]

Like this? Let us know!
Retrieved from "https://marvel.fandom.com/wiki/Galan_(Earth-982)?oldid=5344668"
Community content is available under CC-BY-SA unless otherwise noted.