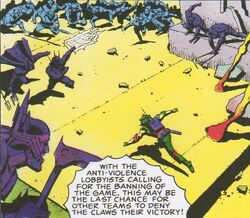 The Game was a violent sport in the 82nd century.

The Game was created by the World Development Council (W.D.C.) no later than 8148 as a palliative for the masses and financed through the Game tax.[1] It was a combat sport of "hunter and hunted".[2] Most teams consisted of five members.[1]

Teams were divided into several leagues according to their strength:

The final of the League Of Nations took place on the Fever Pitch. One "running team" was pitched against all other teams, called the "hunting teams". To win and become the champion of champions, the running team had to get all their members safely home, whereas for hunters it was sufficient to stop one of the runners.[1]

In 8157, Dragon's Claws became the champions of champions after winning the multi-nation league final. The Evil Dead, who were suspended from the final, came second that and two preceding years.[1]

In 8158, a play-off in Miami between the Evil Dead and Split Infinity resulted in deaths of 153 civilians and three members of Split Infinity, the W.D.C. spokesperson Sharon Winters announced the cancellation of the Game. The National Union of Retired Sports Experts was created to relocate ex-Game players into suitable positions of employment.[1]

Vesarin Black was the chairman of the Game Players Association at the time.[1]

Retrieved from "https://marvel.fandom.com/wiki/Game_(Earth-5555)?oldid=5547106"
Community content is available under CC-BY-SA unless otherwise noted.