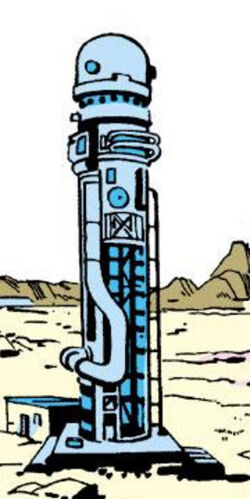 It was a fusion device created for a strategic defense project. Developing offensive weapons was never my intent.

The Gamma Bomb was a nuclear weapon designed by Dr. Bruce Banner. The bomb had a high gamma-radiation output.

Banner was present in the instrumentation bunker at the test site for the first underground detonation of the gamma bomb. Observing that a civilian had breached security and entered the restricted test area, Banner told his colleague Igor Starsky to delay the countdown while he tried to get the civilian to safety. Starsky, secretly a Soviet agent, did nothing, confident that Banner would die in the explosion, bringing the project to a halt. Reaching the civilian, a teenager named Rick Jones, Banner threw him into a protective trench. Before Banner could get himself to safety, the gamma bomb detonated. Intense waves of radiation reached the surface. Banner was irradiated with highly charged radioactive particles. Due to an unknown genetic factor in his body, Banner was not killed by the radiation, which instead caused him to transform into the Hulk for the first time.[1]

Like this? Let us know!
Retrieved from "https://marvel.fandom.com/wiki/Gamma_Bomb?oldid=6540879"
Community content is available under CC-BY-SA unless otherwise noted.