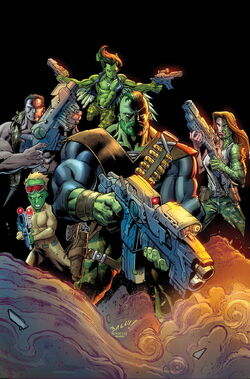 The Gamma corps are soldiers with the D.N.A. of Gamma-mutated heroes and villains inside them. they are armed with a variety of military weapons and have been trained by the enigmatic General John Ryker, to destroy the Incredible Hulk.

Their first mission involved tracking down the failed Hulk-copy experiment, Private Benjamin Tibbets (AKA Flux) and killing him.

During World War Hulk, the Gamma Corps discovered that the Hulk was not directly responsible for their individual situations, so they pursued the people who were, the Illuminati.[1]

Without the backing of the US government, the Gamma Corps become fugitives in hiding, but they continue to search for each Illuminati member. They were confronted by Iron Patriot who, after being incapacitated by the Corps, asked them to become his bounty hunters. Eager to regain a purpose, the Gamma Corps agree.[2]

The Gamma Corps were later attacked by a haywire Hulk A.I., who wanted to kill them as part of the plan of the original Hulk to neutralize every Gamma-powered mutate from the Earth, even though the original Hulk's plan didn't include lethal force. After following the haywire A.I. to Fort Knox, Hulk saved the Gamma Corps from their deaths, but later stripped them of their powers.[3]

Prodigy designed all the equipment for the team.

Prodigy had also designed and made high-tech weapons for the team as well.

Retrieved from "https://marvel.fandom.com/wiki/Gamma_Corps_(Earth-616)?oldid=5727131"
Community content is available under CC-BY-SA unless otherwise noted.