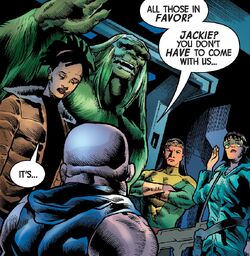 After apprehending the Hulk on behalf of General Fortean of the U.S. Hulk Operations and delivering him to the authorities, the green monster disappeared without a trace, having been confined to the covert Shadow Base Site A. Concerned by the vanishing of Bruce Banner, Avengers member and Alpha Flight commander Captain Marvel decided to form a task force headed by the depowered Walter Langkowski to locate him, this team became known as Gamma Flight, and it was initially comprisoned of Langkowski.[1]

Afterward, the Hulk teamed-up with Doc Samson to investigate the now-abandoned Shadow Base Site A.[4] He left behind Samson after the base collapsed, and he was picked up by Gamma Flight when they appeared to investigate.[5] Together with Samson, Gamma Flight continued following the Hulk, arriving at the scene of a battle he had with a Shaow Base-controlled Rick Jones. The team retrieved the Gamma-Activated Tissue left behind from the battle which had been used by Shadow Base to mutate Jones.[6] The team took the tissue to the Alpha Flight Space Station, but they were raided by General Fortean shortly afterward. Using a Redeemer Armor, he teleported into the station and attacked Gamma Flight, leaving Langkowski as the only casualty. Fortean then retrieved the tissue and teleported away.[7] In retaliation for Fortean's attack, Gamma Flight tracked Fortean's translocator signal and teleported to its source, Shadow Base Site B. However, due to their use of psychics, Shadow Base was expecting their attack and surrounded them on the spot. The tables were turned when the Hulk and his allies appeared to retaliate against Fortean as well.[8] Gamma Flight teamed up with green goliath to take down Fortean,[9] resulting in the Hulk seizing command of Shadow Base. In the aftermath, Samson defected from Alpha Flight and joined the Hulk to keep an eye on him.[10]

As part of his objective to bring down the global status quo,[11] the Hulk waged war against Roxxon.[12] In retaliation, Roxxon orchestrated an attack of four giant monsters on Phoenix, Arizona.[13] When Gamma Flight noticed energy signatures of Hulks and his allies as well as the giant monsters, they flew to the city to help contain the monsters. Titania single-handedly killed the monsters codenamed Bradbury,[14] while the Absorbing Man intercepted a fight between the Hulk and Xemnu, who had arrived to contain the monsters but was secretly working with Roxxon to give the Hulk bad publicity.[15]

Following Roxxon and Xemnu's defeat, the Hulk was hailed as a national hero. He was invited to Georgeville, where the Leader manipulated Rick Jones to overcharge the Hulk with gamma radiation, making him detonate and destroy the town.[16] Gamma Flight appeared to restrain the Hulk's evident distress, since he had reverted to his more childish personality due to the Leader's scheming.[17] Following an arduous against Titania and the Absorbing Man, the Hulk was subdued by Puck using a laser gun to shoot him in the head.[18]

Like this? Let us know!
Retrieved from "https://marvel.fandom.com/wiki/Gamma_Flight_(Alpha_Flight_Space_Program)_(Earth-616)?oldid=6551473"
Community content is available under CC-BY-SA unless otherwise noted.