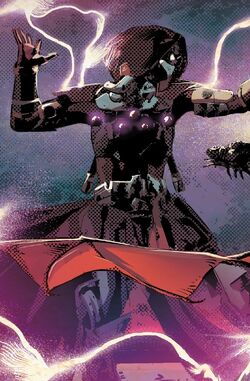 After becoming Requiem, Gamora killed Loki Odinson, obtaining all Infinity Stones except the Reality Stone. Gamora had captured Phyla-Vell and Moondragon, and interrogated them to learn where did they keep the final stone hidden. Moondragon tricked Gamora into reading her mind for the location, allowing her to lock Gamora in mental combat. Phyla-Vell hesitated to strike since it would have been harmful for Moondragon to be connected to Gamora's mind when she killed her. Their window of opportunity closed, and Gamora prepared to reassert control after learning the location of the Reality Stone. Since their universe was now doomed, Moondragon took advantage of her connection to Gamora before it was broken to make her use the Infinity Stones to shoot herself and Phyla-Vell out of the universe and into Earth-616 to escape Requiem.[1]

Like this? Let us know!
Retrieved from "https://marvel.fandom.com/wiki/Gamora_Zen_Whoberi_Ben_Titan_(Earth-18897)?oldid=5794176"
Community content is available under CC-BY-SA unless otherwise noted.