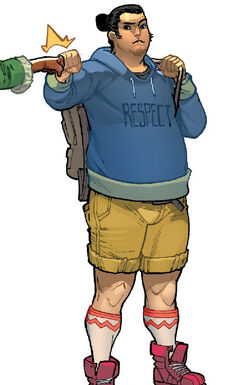 You don't know what it feels like to be -- bigger than you want to be. It's hard out there.

Ganke Lee is a Korean American, the best friend of Miles Morales, and one of the only people whom Miles had shared his secret with. It was Ganke who figured out that Miles carried similar abilities to Spider-Man. He was first alerted to his friend's newfound powers when Miles came bursting into his room and explaining the events that transpired to give him such abilities. Thrilled at Miles's "cool" powers and making the initial assessment that he was a mutant, Ganke made suggestions that he should be a superhero and embrace his abilities; though Miles was much more reluctant to use his powers and wanted to ignore them in pursuit of a normal life. Ganke later made the correct deduction that Miles's abilities were not a product of the X-Gene, but as a result of tampered genetics.

Ganke served the purpose of covering for Miles as he later assumed his duties as the new Spider-Man and became his confidant. He received information about the obstacles Miles faced while he was Spider-Man, and tried to offer his input on how to deal with the situations he encountered. For instance, Ganke suggested that Miles battled his Uncle Aaron, the Prowler, instead of finding an alternate option; he believed that fighting him was the only way to put an end to the problem. Ganke later suggested Miles join up with the Ultimates, saying that they needed his assistance.

As a consequence of the reality-ending phenomena known as incursions, Ganke's entire universe came to an end,[6] leaving him and Miles two of the few survivors of the universe's destruction.[7] When he found himself in a world composed of the remnants of destroyed realities called Battleworld, Miles helped the omnipotent being that was keeping it together, the Molecule Man.[8]

As a repayment to Miles' help, when the Molecule Man's native universe, Earth-616, was brought back from its own destruction by Mister Fantastic, the Molecule Man transported Miles, his family and his friends into it, doing so in such a way it was as if they had always lived their entire lives there.[9] Ganke was one of these people brought to Earth-616, still attending the Brooklyn Visions Academy together with Miles and Judge.[10]

The arrival of former X-Man Fabio Medina to the institute caused a rift between Miles' and Ganke's friendship, due to the former's inability to understand why was Ganke so excited for Medina's presence. In an ill-conceived, and partially ill-intentioned, attempt at helping Miles have somebody to share his super-heroic experience with, Ganke revealed to Fabio that Miles was Spider-Man. Miles was initially upset with Ganke,[11] but they eventually patched up and became both friends and roommates with Fabio.[12]

After Spider-Man disappeared, he convinced famous YouTube blogger Danika Hart to publish a video asking her viewers to alert her if they found anything about him. Although hesitant at first, she agreed and they spent the night in her perch looking at the sky, while waiting for news.[13] Ganke continued hanging out with Danika afterwards and they started dating. Since he didn't want to risk her deducing Miles' identity through him, she agreed to call him by the fake name of Ned.[4] Regardless, Ganke eventually blurted out Miles' name by accident.[14] Danika looked into how much she could make by selling out a superhero's identity,[15] but dropped the idea since she realized she was in love with Ganke, and admitted this to him through a letter.[5]

Despite this confession, Danika seemed to have disappeared from Ganke's life and, after some unusual circumstances, he seemed to have developped feelings for Miles' ex-girlfriend, Barbara Rodriguez.[16]

Like this? Let us know!
Retrieved from "https://marvel.fandom.com/wiki/Ganke_Lee_(Earth-1610)?oldid=6467958"
Community content is available under CC-BY-SA unless otherwise noted.