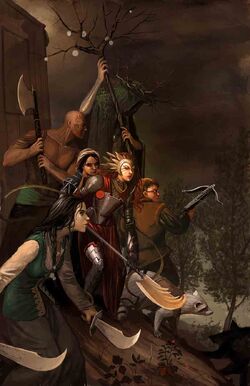 Origin
A troupe of players

The Gardiner's Men were a troupe of players that performed not far from London in King James' England. One day, they were attacked by a group of beasts while in the woods. Witch hunters Angela and Lady Serah were departing London and discovered the troupe's predicament. The pair aided the Gardiner's Men in killing the beasts. Traces of magic from the Enchantress, an evil Faerie Angela and Serah were hunting, were found in the beasts. This indicated that the Enchantress was nearby.

The Gardiner's Men accompanied Angela and Serah to a pagan village in the outskirts of York. There, the troupe help Angela and Serah fight a Faustian named Edwin Brocc. Brocc had attacked Angela after he realized that she had discovered his secret and transformed into a venomous monster. Brocc was eventually vanquished.[1]

After Angela defeated the Enchantress and was cursed by her power, thus becoming the Faustian Queen, Serah asked Shakespeare to write a play in order to immortalize Angela. The Gardiner's Men played Angela and Sera's story.[2]

Retrieved from "https://marvel.fandom.com/wiki/Gardiner%27s_Men_(Earth-311)?oldid=5547125"
Community content is available under CC-BY-SA unless otherwise noted.