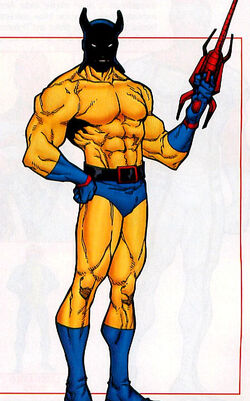 Shellshock was a flunky of Psycho-Man along with Ivan Karlovich and Live Wire; Psycho-Man kept them under control using his Control-Box. Psycho-Man intended them to guard his secret base in the Caribbean Sea, but the trio was defeated by the invading Inhuman Royal Family and Black Panther. Shellshock shot a hunter missile to track the Panther, but the Panther covered behind Shellsock himself, so that Shellshock was hit by his own slug.[1]

When Shellsock left Psycho-Man’s employ, he kept the weapon designed for him and teamed up with fellow former flunky of Psycho-Man, Live Wire. They attempted to steal Alicia Masters' statues, but were defeated by the Thing.[2] He tried to get revenge on him when the Thing was hospitalized, but another superhero friend of the Thing stopped him before he could reach his bed.[3]

Shellshock was later present at the Bar with No Name, and met his end there, thanks to the Scourge of the Underworld.[4]

Like this? Let us know!
Retrieved from "https://marvel.fandom.com/wiki/Gary_Buser_(Earth-616)?oldid=5728818"
Community content is available under CC-BY-SA unless otherwise noted.