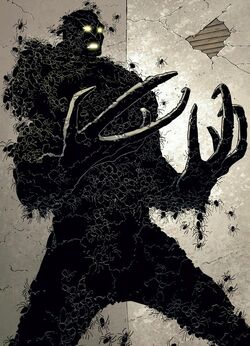 Following the defeat of Shathra, Ezekiel warns Peter Parker of the coming of the Gatekeeper, a powerful entity who controls mystical forces. Ezekiel says that the Gatekeeper sees him as unworthy to be in possession of his powers since he received his powers by accident, and that he will kill him. Ezekiel tells Peter to return to Kwaku Anansi's temple in Ghana with him, but he refuses.

Later, a swarm of spiders attacks New York. Spider-Man tries to save as many citizens as he could, but Ezekiel tells him that the Gatekeeper has arrived to kill him and urges him to go with him. The spiders gather to form the body of the Gatekeeper, who tells Peter that bugs are important to the world and the spiders are the hunters of the bug-world. Spider-Man attempts to fight him but is outmatched. The Gatekeeper tells Peter that he was chosen by mystical forces to receive spider-powers out of all the students in the demonstration, due to his anger over being bullied and unable to fight back making him a natural hunter.

Peter realizes that contradicts what Ezekiel said, and the Gatekeeper reveals that Ezekiel was unworthy of his powers because he "stole" them. Ezekiel then abducts Spider-Man and takes him to the temple in Ghana, telling him that he has to kill Peter because the Gatekeeper will only allow one of them to live. Ezekiel defeats Peter by drugging him with a syringe, then chains him to a column in the temple and stabs him with a knife to have his blood flow into the spider runes on the floor.

The Gatekeeper manifests in the form of a giant spider monster to kill Peter as Ezekiel walks away. In a panic, Peter uses his spider-sense to bond with Ezekiel's mind and show him his heroics. Ezekiel realizes that he has wasted his life seeking wealth and Peter is the one worthy of his powers. Ezekiel then attacks the Gatekeeper to save Peter, and is killed. Later, a shaman named Miguel buries Ezekiel and tells Peter that Ezekiel was redeemed by saving him. Peter asks him if his powers came from science or magic, and Miguel tells Peter that they came from both, that they co-exist and that Peter was meant to have them.

Like this? Let us know!
Retrieved from "https://marvel.fandom.com/wiki/Gatekeeper_(Earth-616)?oldid=5474181"
Community content is available under CC-BY-SA unless otherwise noted.