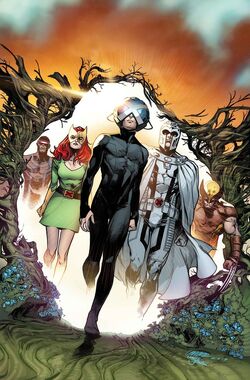 The Gateways were a type of Flowers that grew on Krakoa. They had the power to create portals between one another. The new mutant nation of Krakoa utilized them by planting one flower from a pair of twins at a specific location (such as an embassy) throughout the world, creating an instant pathway to its twin back on Krakoa. The Gateways were monitored and Krakoa allowed only the mutants to pass at will. Any non-mutants had to be accompanied by one as well as granted a specific permission.[1]

List of known Krakoan Gateways off of the main Krakoan Isle:

Like this? Let us know!
Retrieved from "https://marvel.fandom.com/wiki/Gateways?oldid=6466243"
Community content is available under CC-BY-SA unless otherwise noted.