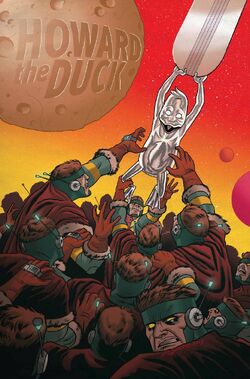 Base of Operations
Collecton
Affiliations

I am a Gatherer. I gather unique items and species for the Collector to safeguard when the universe is destroyed. It is an honor to become a part of his collection. Congratulations.

The Gatherers are the Collector's personal army of servants tasked specifically with the mission to retrieve any specimens of interest for their master's collection in the planet Collecton. One of the Gatherers was ordered to kidnap Howard the Duck from Earth.[1]

After being brought to Collecton, Howard encountered another prisoner, the Guardian of the Galaxy Rocket Raccoon, who had been captured trying to recover one of the items of the Collector's collection. When Howard and Rocket were examined to retrieve genetic material, Rocket managed to break free. The two fugitives ultimately escaped with the help of the rest of the Guardians of the Galaxy, and the Gatherers tried to stop them to no avail.[2]

When the Gatherers were checking on the damages caused by Rocket and Howard's escape, two specimens created from the genetic material of Rocket and Howard for mating purposes, Shocket and Linda, were put under the care of Gatherer D-3X. D-3X grew fond of the two girls and escaped with them. They ultimately travelled twenty-five years into the past to escape the Gatherers on their pursuit.

Once the twenty-five years passed, Shocket and Linda were back under the Collector's radar, and the Collector sent a Gatherer to retrieve them along with Howard.[3] Gatherer 7-X9 approached the ship Howard, Linda and Shocket were on, as they were trying to reach Collecton to save all of the specimens imprisoned. However, 7-X9's ship was destroyed by the Stranger, who wanted Howard for himself.[4]

Retrieved from "https://marvel.fandom.com/wiki/Gatherers_(Collector%27s)_(Earth-616)?oldid=5547130"
Community content is available under CC-BY-SA unless otherwise noted.