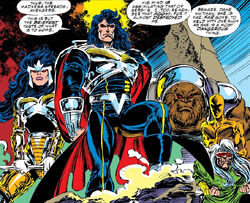 The last of their reality, the Gatherers are a team of former Avengers of various alternate realities who survived their world's destruction. Tricked into believing that their world's Sersi was to blame, Proctor united them in their common hatred, giving them a foe, the "prime" Sersi of Earth-616. But for them to carry out their vengeance, each member had to kill their Earth-616 counterpart (an act called "gathering") within a certain amount of time or face a cellular breakdown that would cause their deaths. Unknown to the members of the Gatherers, their leader Proctor was responsible for each world's destruction as he drove that world's Sersi into madness, causing her to lash out and destroy everything around her.[citation needed]

Retrieved from "https://marvel.fandom.com/wiki/Gatherers_(Multiverse)?oldid=5637912"
Community content is available under CC-BY-SA unless otherwise noted.