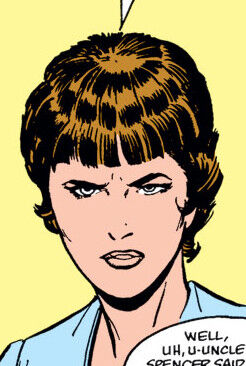 Like her younger sister, Mary Jane Watson, she had dreams of becoming a dancer, but she gave that up to marry her boyfriend, Timothy Byrnes after high school. They then moved away, and Gayle got a job while Timmy studied law. Their first son was born when Timmy was nineteen and still in college. Eventually Timmy's grades slipped, and the marriage deteriorated. Timmy blamed Gayle for his failure, and when Gayle was pregnant with her second child, he abandoned them and Gayle was left a single mom.

Gayle resented Mary Jane for leaving after their mother died (MJ was determined never to give up on her dreams like her sister and mother did), but she eventually forgave her.

Like this? Let us know!
Retrieved from "https://marvel.fandom.com/wiki/Gayle_Watson_(Earth-616)?oldid=5850095"
Community content is available under CC-BY-SA unless otherwise noted.