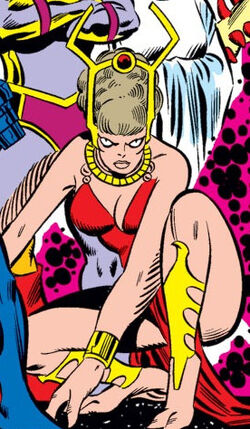 This New Salemite daughter of Nicholas Scratch from an unrevealed wife was thus an heir to a magically enhanced, vaguely inhuman-looking, alter-ego. Her activities remain largely unrevealed, serving as part of Salem's Seven, Scratch's elite warriors.[1]

She eventually turned on the Seven in protest at their activities, and was imprisoned by them.[2]

She (and the rest of Salem's Seven) was killed in the explosion of magical forces caused by the Scarlet Witch that destroyed New Salem, but she (and the other Seven) has since been resurrected.[3]

Gazelle was among several animal-themed super-villains captured by Taskmaster and Black Ant to serve as hunting targets for Kraven the Hunter and Arcade. In the ensuing chaos, Gazelle was stabbed and killed by a robotic hunter.[4]

Gazelle's human form was capable of wielding magic on par with the rest of the New Salemites. In addition, she was able to assume a form that allowed her additional powers-- a deer-like form with superhuman strength in her legs, capable of fantastic leaps and powerful kicks.

Her powers were enhanced by the Wizard, amplifying her speed and agility to levels similar to Quicksilver.

Like this? Let us know!
Retrieved from "https://marvel.fandom.com/wiki/Gazelle_(Scratch)_(Earth-616)?oldid=5475719"
Community content is available under CC-BY-SA unless otherwise noted.