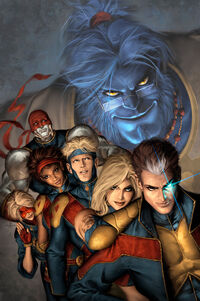 GeNext is the name given to the rag tag team of adolescents who have banded together to stand up for each other.[citation needed]

The team is never officially named in its ten issues and two mini-series of appearance though. The team is more unconventional in some respects than the X-men. All the characters fit a particular mode or requirement of a team/X-Men book but their motivations are very different.[citation needed]

In the first series they debuted in they were simply friends looking for the runaway mutant No-Name after she mysteriously disappeared. Only one member really has any heroic intentions; Pavel. and by the second series they are given a choice as to what they want to do with their lives which is very different than any x-men team before as hey were always gathered to try to promote peaceful coexistence and battle evil mutants.[citation needed]

Retrieved from "https://marvel.fandom.com/wiki/GeNext_(Earth-41001)?oldid=5547170"
Community content is available under CC-BY-SA unless otherwise noted.