This page is similar in name or subject to other pages.

See also Gehenna for a complete list of references to distinguish between these closely named or closely related articles. 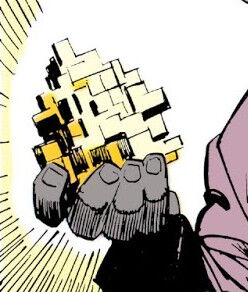 The Gehenna Stone was a multi-faceted, circular rock which served as a repository of power for the evil entity known as Ba'al. It was named for the city of Gehenna, a desolate wasteland in modern-day Jerusalem where the stone was first forged. Millennia ago, Ba'al led his followers through various perverse and hideous rituals, including drinking the blood of human beings.[citation needed]

It is believed that God was so offended by the atrocities committed in Gehenna that he sent forth a proud warrior known as the Hand of God to stop him. The Hand of God slew Ba'al, but his inherent evil was so strong, that it literally spilled forth from his dead body and entered a glittering multi-faceted stone. Cut by his own followers, this enchanted rock became known as the Gehenna Stone. Ba'al's followers rebelled against the Hand of God, but the Hand of God persevered, splintering the Gehenna Stone into pieces with his sword. He then cast the fragments across the four corners of the globe, insuring that Ba'al's soul could never reconstitute itself. These fragments remained undiscovered for centuries and as such, Ba'al's evil remained dormant.[citation needed]

In the late 20th century, a few fragments of the Gehenna Stone were uncovered and Ba'al's spirit awakened. As more and more pieces were discovered, Ba'al recovered enough strength that he was able to take possession of a mortal host and reconstitute his corporeal form. From there, he used his power to create his Baalist followers, pseudo-vampires who lived and died at Ba'al's command. To achieve his full might however, he needed all of the pieces of the Gehenna Stone.[citation needed]

One of the fragments was discovered by the mentally unstable Burt Corrigan, a man who patterned himself after famous heroes of the silver screen, not the least of which included Indiana Jones. Corrigan found a Gehenna Stone fragment while on an expedition in Egypt. He donated it to the San Francisco museum of antiquities, but upon discovering the gem's true power, decided to finagle his way onto the board of directors so he could steal it.[citation needed]

Ba'al learned that Corrigan possessed the fragment and sent his pseudo-vampires after him. Fortunately for Corrigan, he had help. His brother Archie was present in San Francisco, as well as Archie's friends, "Patch" (aka Wolverine) and Jessica Drew. The Baalists failed to kill Corrigan, but they did succeed in recovering the stone fragment. Afterward, Ba'al headed towards Madripoor to find the last missing piece.[citation needed]

He eventually arrived in Madripoor at the court of the country's undisputed leader, Prince Baran. Baran was now in possession of the final piece of the Gehenna Stone. Ba'al offered to make Baran immortal in exchange for the stone, but grew impatient with Baran when he didn't immediately commit to a decision. He took the last fragment and was finally able to make the Gehenna Stone complete.[citation needed]

Wolverine and Jessica Drew arrived at the castle, and Wolverine had a third encounter with Ba'al. During their fight, Ba'al found himself suddenly scared of Wolverine, but could not understand why. He had no way of knowing that Wolverine was the reincarnation of the Hand of God -- the warrior who first slew him ages ago. Wolverine stabbed at the artifact with his Adamantium claws, shattering it once again. [citation needed]

Like this? Let us know!
Retrieved from "https://marvel.fandom.com/wiki/Gehenna_Stone?oldid=6448586"
Community content is available under CC-BY-SA unless otherwise noted.