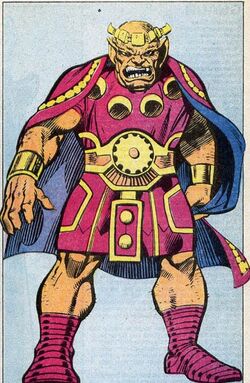 Geirrodur was born to the Rock Trolls that lived in the Kingdom of the Trolls, Realm Below, Asgard. His father was the master blacksmith and maker of the tribe, and taught Geirrodur all the arts of the trade. When his father died in a war against the Storm Giants, Geirrodur took his father's place.[1]

Loki, the god of mischief, helped Geirrodur overthrow the King of the Trolls, Veldemaris. Ever since that day millennia ago, Geirrodur ruled the Trolls, having forged a mystic spear out of uru as a show of power. Among Geirrodur's finest accomplishments during his reign was the design and construction of burrowing machines which, due to the uru metal of their bits and scoops, could dig holes into other dimensions. Geirrodur's machine has even dug a transdimensional tunnel from the caverns of Asgard into the bowels of the Earth. Geirrodur's rule was only once opposed when, for a brief time, the Troll warrior Ulik usurped the throne. Geirrodur unsuccessfully attempted to conquer Asgard several times.[1]

Rock Troll Physiology: Trolls require less oxygen than human beings, making them well suited for life underground. Their vision extends far into the infrared wavelengths, enabling them to see quite well in the relative darkness of the earth. Trolls are immune to most Earth diseases, and have natural lifespans of about 1,500 years. While no sorcerer himself, Geirrodur displayed some control and knowledge over magic, enough to undo Ulik's charm with a simple touch.[2]

Geirrodur is a genius among Trolls (as well as being a master craftsman) but his intellect would only rate slightly above the human average.

Geirrodur possesses the average physical attributes of his race: greater than human strength (able to lift about 25 tons), endurance (about 2.5 times that of the average human), and durability (a Troll's hide is far tougher than human skin).

Trolls are, however, generally slower than human beings, and are not quite as intelligent.

Like this? Let us know!
Retrieved from "https://marvel.fandom.com/wiki/Geirrodur_(Earth-616)?oldid=6417315"
Community content is available under CC-BY-SA unless otherwise noted.