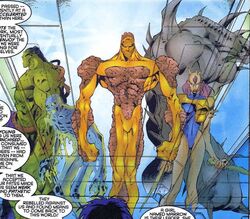 When most of the surviving Morlocks were seemingly killed by Mikhail Rasputin, they were actually brought to another dimension. There, Mikhail had established a citadel for himself on the top of a massive hill. The Social Darwinist philosophy of "survival of the fittest" was the only thing which governed the society. If someone could reach the summit of the hill they were considered "fit" and worthy of being part of Gene Nation.[2]

The former Morlock leader Callisto cared for Marrow during this period and displayed a maternal attitude towards the young mutant. When her powers fully manifested she was forced to "up the hill", becoming more savage and killing her opponents to survive. When she managed to reach the top, Mikhail considered her fit to join his elite fighting team Gene Nation, which eventually became a terrorist group whose mission was to punish humans for their hatred towards mutants.[3]

In that harsh dimension, time passed quickly. Marrow became a leader and several other members of Gene Nation returned to Earth. They discovered only a few years had passed during their absence. Marrow and the other members of Gene Nation began a homicidal terrorist campaign against surface-dwelling humans. After inconclusive battles with the X-Men and Generation X, Gene Nation was defeated by the X-Men.[4][5] Marrow wired a time bomb to her own heart to force the X-Man Storm, who had herself led the Morlocks in the past, to either yield or kill her; Storm tore out Marrow's heart.[6] However, due to Marrow's possession of two hearts to compensate for her random bone growth and superhuman regenerative abilities, she survived.[7][8]

Marrow later reunited a Gene Nation to confront the Weapon X in a series of attacks against their facilities.[1]

Like this? Let us know!
Retrieved from "https://marvel.fandom.com/wiki/Gene_Nation_(Earth-616)?oldid=6487992"
Community content is available under CC-BY-SA unless otherwise noted.