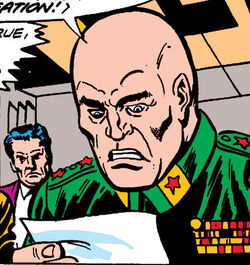 Despite our military might, we are powerless against the intense radioactivity of the Presence and his recombinant DNA creation! You are our only hope!

General Kharkov was a Soviet general. He was in charge of a Soviet Research Institute, where the then-recently mutated Red Guardian was being held. The scientists of the facility reported to Kharkov their inability to restore the Guardian to normal. They recommended quarantine for her, in order to keep other people safe from radiation. Kharkov replied that the Guardian was growing restless, and that they did not have the power to hold her against her will. [1]

Kharkov received a report that the Presence had been located in the Forbidden Zone and reawakened a Giant Amoeba. [1] Kharkov informed the Red Guardian about the situation, claiming that the Soviet Union's military might was unable to face the intense radioactivity of the Presence and his creation. He offered her the mission, claiming that she was their only hope. The Red Guardian agreed to take the mission. Kharkov evacuated the Institute, to allow the Guardian to exit her holding cell without irradiating the personnel. [2]

Like this? Let us know!
Retrieved from "https://marvel.fandom.com/wiki/General_Kharkov_(Earth-616)?oldid=4314533"
Community content is available under CC-BY-SA unless otherwise noted.