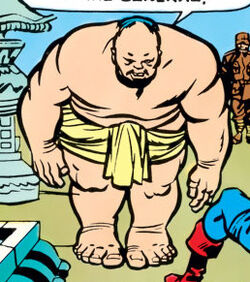 General Wo was a former Sumo wrestler who attained the rank of general in the viet cong army. When his unit captured the American pilot Jim Baker, Captain America travelled to Vietnam to free him and challenged Wo—because Baker's brother had saved Captain America's life before. Captain America fought the General and defeated him; then Captain America and Baker escaped using the General's private jet.[1]

Is an experienced fighter of sumo.[1]

Like this? Let us know!
Retrieved from "https://marvel.fandom.com/wiki/General_Wo_(Earth-616)?oldid=4703860"
Community content is available under CC-BY-SA unless otherwise noted.