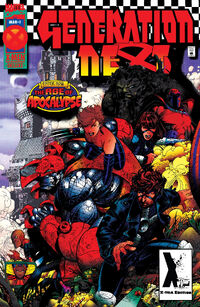 Allies
Magneto and his X-Men

Place of Dissolution
The Core

When Colossus refused to begin fighting against the forces of Apocalypse, Magneto convinced him to take up training a young generation of X-Men, a group called Generation Next.[1] Colossus and his wife Shadowcat trained the youths in the use of their powers and how to survive in the hostile world they lived in.

In recent times, Magneto located Colossus' sister Illyana Rasputin who was a slave in the Portland Core. Magneto charged Generation Next with recovering her so that her latent time travel abilities could repair their damaged reality.[2]

The team split up into groups to infiltrate the Portland Core: Husk and Vincente smuggled themselves in with Paige pretending to be a pleasure slave and tricking security chief Quietus into drinking Vincente, killing him. Paige and Vincente used their powers to pose as Quietus, Chamber and Skin posed as workers, and Mondo used his powers to sneak into the facility secretly. While they were infiltrating the Core, Colossus and Shadowcat stood by as backup while receiving updates from Know-It-All.[3]

The group ran afoul of Sugar Man, who ordered "Quietus" to assassinate Chamber and Skin, while Mondo managed to find Illyana and tried to secret her away. With the situation growing hairy, Colossus and Shadowcat entered the facility to help their charges.[4] Generation Next's position was exposed, and Sugar Man slayed Mondo. Meanwhile, the other members of Generation Next were swarmed by the Sugar Man's forces. Colossus recovered his sister and sent her off with Shadowcat. Seeing that Paige was the only member left, and she was overwhelmed by Sugar Man's forces, he abandoned her and her team.[5]

Colossus and Shadowcat were ultimately slain as well: Shadowcat in an attempt to stop her rampaging husband, while Colossus was killed by Gambit.[6] Paige survived her ordeals to be rescued by her siblings Amazon, Cannonball, and Icarus and plotted revenge against the X-Men. She and her siblings were slain by Magneto and the X-Men for attempting to kill his wife Rogue and his son Charles.[7]

Retrieved from "https://marvel.fandom.com/wiki/Generation_Next_(Earth-295)?oldid=5547154"
Community content is available under CC-BY-SA unless otherwise noted.