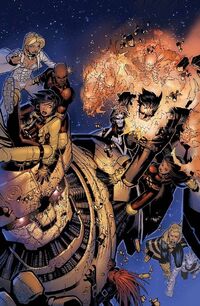 Generation X was a team of mutant teens formed shortly after the Phalanx attempted to absorb all mutants, starting with the next generation of mutants. The team was led by both Banshee and Emma Frost, and was comprised mainly of Jubilee, Husk, Synch, M, Chamber, Skin, and the mysterious Penance. The team's primary purpose was to receive an education and learn to be the next generation of X-Men, rather than fighting supervillains. The school was located at the Massachusetts branch of Xavier's School.[1][2]

Both Banshee and Emma Frost educated the teenagers in school subjects as well as combat and field skills. Jubilee and the other mutant teens honed their unique abilities and occasionally battled minions such as the Juggernaut, Omega Red, and their arch-rival Emplate.[2][3][4][5]

Shortly after the formation of the mutant teen team, Penance was dropped onto the front lawn of the Massachusetts Academy by Gateway. Penance had previously been a prisoner of Emplate, a parasitic mutant who fed upon other mutants that the group had encountered previously. Penance couldn't speak, understand English (apparently), and had immunity to telepathy. Chamber was able to convince her that he knew how she felt and calmed the girl down into staying with the team.[6]

The Massachusetts Academy closed its doors following a revenge plan by Adrienne Frost that ended in Synch's death and Emma murdering her sister. Emma began teaching in Genosha, while Banshee founded X-Corps, which included his former students Husk, Jubilee, and M among its membership. Chamber went on to join the X-Men.[citation needed]

Retrieved from "https://marvel.fandom.com/wiki/Generation_X_(Earth-616)?oldid=5806493"
Community content is available under CC-BY-SA unless otherwise noted.