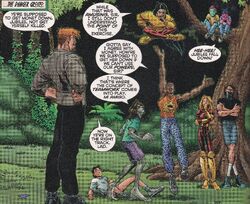 Dude, you're a mutant with special powers, just like me and the other Generation X kids!

Generation X seemingly had a similar history as its Earth-616 counterpart. They were the students and staff of Massachusetts Academy.

Cerebro detected a mutant energy signature and identified him as a teleporter. Banshee recognized the ability as being that of Jamie Moore and the team headed to Quantico.

They encountered Gen¹³ and mistook them for Moore's captors. Meanwhile, Emplate appeared, kidnapped Gen¹³ ally Qeelocke, and agreed to a partnership with Moore's true captors, the Freaks. They teleported away, but Grunge and Husk were able to jump into their portal.

The two teams quickly came to a truce and convinced Moore to help them rescue their teammates. Teleporting to the Freaks base, they were able force Emplate back to his domain, but were hypnotized by Trance. Luckily, Anna being a robot couldn't be compromised and she and the Freaks agreed to a tie and left. With everyone safe, the heroes went their separate ways.[1]

Xavier's School for Gifted Youngsters' students were invited by Mr. Pretorious for a holiday at his La Casa Del Sol. Generation X quickly discovered the resort had a negative reputation in the nearby town and spotted a human-animal hybrid climbing the castle, but mistook it for an illusion caused by a lightning storm. The following morning, they were reunited with Gen¹³, who were also invited. Everett Thomas and Roxy Spaulding explored the castle together after Gen¹³ was attacked by what they were told was an ape, only to be knocked out and kidnapped. Meanwhile, Angelo Espinosa, Bobby Lane, Eddie Chang, Jubilation Lee, Monet St. Croix were on a nearby beach when they were attacked by Salty, a human-fish hybrid.

While he escaped, the teams realized that the monsters looked like human-hybrids and that Mr. Pretorious was responsible. The beach kids were able to find Thomas and Spaulding and overheard Pretorious' plans, but decided to regroup first. Burnout was sent to find the others in town, but they arrived first. The rest of the superheroes suited up and broke into Pretorious' lab, only to be knocked out by knockout gas. When they awoke, he gave them truth serum and they gave him the location of Burnout. He left with his hybrids to hunt Lane and left his prisoners under the watch of Nook and Cranny. Synch used his powers to drain the dizziness from Freefall, who used her powers to levitate their cage and knocked out Pretprious' assistants. Generation X and Gen¹³ came to Burnout's rescue, freed the hybrids, and arrested Pretprious. After explaining what happened to their professors, Generation X spend the rest of their holiday with Gen¹³'s in their hometown, La Jolla.[2]

Retrieved from "https://marvel.fandom.com/wiki/Generation_X_(Earth-7642)?oldid=5547159"
Community content is available under CC-BY-SA unless otherwise noted.