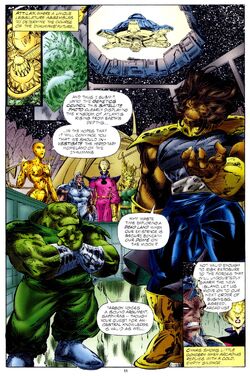 The Inhumans were a genetically modified offshoot of humanity that were created by the Kree centuries ago and lived in isolation. When Randac, the leader of the Inhumans, discovered that exposure to the Terrigen Mist caused their race to gain fantastic powers, the Inhumans began to indiscriminately expose themselves to Terrigenesis.[8]

This eventually led to many monstrosities being created. As such, the Genetics Council was formed as a means of enforcing selective breeding practices among the Inhumans to ensure that their people maintained useful transformations.[3] Since its creation from Randac's era, the Genetic Council was also the government of Attilan, and the major legislative, judicial and executive body.[8]

The Genetics Council operated separate of the Inhuman monarchy, their authority eventually superseding the authority of the crowned king.[3] As the majority of the council were elders of the Inhuman race, they were often left in charge during periods in which the royal family was absent.[9]

Early members of the Inhumans Genetic Council included Agon and Phaeder. Phaeder was to be punished for unethical experimentation, but faked his death before fleeing Attilan.[10]

Over 100 years ago, Agon began to experiment with how early one could be exposed to the Terrigen Mist. He exposed his son Black Bolt to the mists while he was still in utero.[11][12] When Black Bolt was born it was soon discovered that the boy's vocal chords were incredibly powerful and that even the most utter whisper would could shatter a mountain.[13] The Genetics Council ruled that Black Bolt was too dangerous and had him locked in a soundproof room until the boy could master his powers.[3]

Bolt was eventually released on his 19th birthday when he did master this control.[14] However, Agon was accidentally killed not long thereafter when Black Bolt was forced to use his voice to destroy an invading Kree ship. The ship crashed into a building where Bolt's mother and father were at, killing them both. Black Bolt then took up the Inhuman throne shortly thereafter.[15]

Over the ensuing decades, the Genetics Council operated behind the scenes of Inhuman society, being the final word on any unions and reproduction that occurred within their hidden refuge.[3]

Member of the Council, the chief justice Atrophus Lohn[3] and his inner circle gathered more and more power surrendered from the rest of the Council.[2]

By the modern age, the Genetics Council continued to operate behind the scenes, even during turbulent periods as Black Bolt's brother Maximus made frequent attempts for the Inhuman throne, and attacks from various outside forces.[16] When Attilan was decimated in order for the Inhumans to be free of a Negative Zone Barrier around their land, the Genetics Council were left in charge while the royal family ventured out into the world.[9]

They later allowed Crystal of the royal family marry the "mutant" known as Quicksilver,[17] They also agreed to allow them to have a child, a girl named Luna, who was born a normal human after the Inhumans had relocated to the Blue Area of the Moon.[3]

They later consented to Black Bolt and Medusa being married, but forbid them to reproduce, fearing that their child might be as destructive as Black Bolt, insane as his brother Maximus, or both.[18]

Popular dissent towards the Council

At that point, the Council included an inner circle[2] of seemingly four old Inhumans, led by the chief justice Atrophus Lohn, who led the whole Council with Minius Gerion and Zhime Krepit[19] (possibly part of this inner circle). They were more and more opposed by the people, seemed senile and were even known as The Elders.[3]

However the Inhumans began to protest against the increasingly rigid Genetics Council and their controlled breeding rules. This became a more contested issue when a young Inhuman woman, Tally, committed suicide after it was arranged that she was to marry someone other than the man she loved. When it turned out that Medusa was pregnant with Black Bolt's child, the council ordered that she abort the child. When Medusa refused, but received no support from her husband, she and the rest of the royal family fled to Earth where Medusa eventually gave birth to her son[3] Ahura.[2]

After the child's birth, Medusa was convinced to return with her powerful offspring and turn him over to the Genetics Council for examination. The Genetics Council declared the boy too dangerous,[3] as the chief justice intended to grasp total power of the Inhumans and arranged to have the boy turned over to the genetics expert Skip Ash, from Earth, in order to receive Ash's advanced gene-altering technology. The chief justice intended to retrieve Ahura eventually.[19]

However the boy's ship crashed and he was instead taken by a rural family who raised the boy. Later when the Royal Family located the boy, and discovered why he was sent to Earth, they decided to keep him there to continue living on in secret.[20]

Eventually, the Genetics Council, including the chief justice's inner circle now composed of only four members and going as the Council of Four, learned the location of Ahura and sent the Seeker, Leonus, Timberius, Falcona, Pinius, Felor and the Burrowers to collect the boy. They were stopped by the royal family and the Fantastic Four, but Triton (sent by Black Bolt) collected the boy himself.[2]

The Genetic Council dismissed the concern of a possible violation of law (one of their members having broken the law in secretly sending Ahura off-world) by granting unconditional amnesty to anyone involved, but put Medusa, Karnak, Gorgon and the dog Lockjaw under custody of Black Bolt, responsible for their good behavior under penalty of his own deposal, and had Ahura return to the Council while suspending visiting rights from his parents.[2]

Ahura was put inside Skip Ash's Morphotron, the chief justice intending to mold him into his monarch pawn, to use when he would have deposed Black Bolt. At that point, the Fantastic Four (who had infiltrated Attilan), allied with Medusa and Gorgon, opposed the Council's forces, with the coucilmen urging Black Bolt to execute both his wife and cousin, to which he answered by entering the Council Tower where he witnessed the chief justice siphoning the Evil Eye of Ahura.[2]

The corrupt chief justice then slew his fellow members and absorbed their energies becoming greatly powerful and sought to do the same to Ahura. However the boy psionically drew the power back to him, killing the chief justice in the process.[2]

The surviving members of the Council admitted in shame that their institution had let the chief justice and his inner circle gather too much power. They declared the death of the Genetics Policy and offered the royal crown to Black Bolt in order to form a re-strengthened monarch, but he refused, wishing for the abolition of the monarchy and council in favor of a more democratic model. Consequently the council members offered Ahura the crown, but he shattered it instead. The Royal Family then went into a self-imposed exile.[2]

A newly elected council was formed which had full control over Inhuman society. This new council included members such as Ministress Thernon and Minister Kitang. When members of the Kree attempted to seek refuge outside of Attilan following the fall of their empire to the Shi'ar, the council initially accepted. However tensions began to rise and it was exposed that a rogue group of Kree sought to wipe out the Inhumans and reclaim the Blue Area of the Moon for themselves. This attempt was thwarted by the Inhuman royal family who returned to Attilan after a failed assassination attempt by the Kree.[4]

Later a new Genetics Council was selected which included Chancellor Arcadius, Targon, Sapphiras, Furgar, Porcal, Cynas. This group formed a new Inhuman militia called the Crimson Cadre, led by General Ator.[21] During their rule, they discovered that Atlantis was being risen from the ocean floor by the sorceress known as Morgan le Fay. This greatly interested the Council as they considered Atlantis their ancestral home, and sent the Crimson Cadre to Earth to wage war on humanity in order to reclaim it. Not long after this Attilan was threatened when scientist Nathaniel Richards accidentally triggered a trap within the citadel belonging to the Earth's Watcher. Looking after only themselves, the Council fled to Earth with the Terrigen Mist to seek an alliance with Morgan le Fay. After they fled, the Fantastic Four arrived on the Moon and saved Attilan by shrinking it down to size and taking it aboard their ship.[22]

The Council then manipulated the royal family of the Inhumans to do their bidding.[23][24] They also managed to recover Attilan and bring it back to Atlantis.[25] During the final battle, Attilan was restored to it's normal size on the island of Atlantis. The Terrigen Mists were also unleashed, but Arcadius and his fellow Councilors managed to seal Attilan within another Negative Zone Barrier to prevent the Mists from escaping out into Earth's atmosphere.[26] The council attempted to get revenge against the Inhuman royal family as they fled Attilan, but this attempt failed.[27]

Since then, the Inhuman royal family reclaimed the Inhuman throne, and while the council remains, the last roster has not been seen since the Atlantis Rising debacle. Since then the Genetics Council has taken on a more subordinate role, with the Inhuman monarchy taking full control over society, the council is now answerable to Black Bolt and not the other way around.[28] The Council still dealt with civil matters, such as granting Timberius the right to kill a soldier responsible for killing his twin-brother.[29]

Please find here the functionment of the Genetic Council.

Retrieved from "https://marvel.fandom.com/wiki/Genetic_Council_(Earth-616)?oldid=5547167"
Community content is available under CC-BY-SA unless otherwise noted.