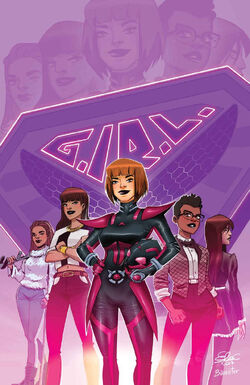 G.I.R.L. Genius In action Research Labs is dedicated to finding the brilliant girls and women who will not just save the world, but change it.

After mentioning that S.H.I.E.L.D.'s list of most intelligent humans listed women no higher than 27th, Nadia Pym was prompted to start Geniuses In action Research Labs, an enterprise to assess the Earth's greatest female scientific minds and convince S.H.I.E.L.D. that their list was outdated and in need of revision.[2]

To that end Nadia enlisted Edwin Jarvis to take her to New York City where she recruited Tai and Lexi Miranda in the Washington Heights neighborhood of Manhattan. Nadia next went to the Lower East Side and spoke with Lunella Lafayette;[1] however, although the Inhuman liked the idea, she was too busy to commit to the project herself.

Jarvis then took Nadia to Times Square, but the person she wanted to talk with didn't work until later that night, so they continued to the Brownsville neighborhood of Brooklyn, where Shay Smith joined G.I.R.L.'s ranks.

Returning to Midtown, Nadia finally met with the last name on her list, Priya Aggarwal; however, the young woman stated she wasn't interested, as she'd rather be popular than smart.[3] She soon changed her mind though when Nadia donned the Wasp's Suit and saved Priya's mother from Poundcakes and Letha of the Grapplers.[4]

Retrieved from "https://marvel.fandom.com/wiki/Genius_In_action_Research_Labs_(Earth-616)?oldid=5698256"
Community content is available under CC-BY-SA unless otherwise noted.