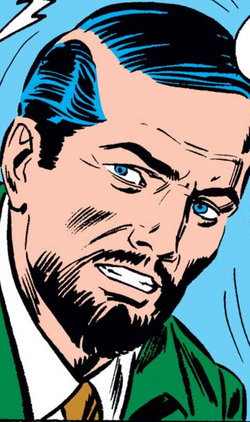 Geoffrey Ballard was a government official who was sent to Star International as a security official overviewing a project that was sent to Los Angeles in a box. When the box was stolen, he forbade Tony Stark to inform his LA employee Bill Foster about the box's contents.[1]

Later, he started working together with the mutant Mystique, they stole a prototype armor and weapon named Centurion from a heavily secured armory on the S.H.I.E.L.D. Helicarrier.[2] He then took the name Centurion for himself.[3] Ballard had been stalking Ms. Marvel for some time prior to this once even breaking into her apartment and her office at Woman Magazine.[4][5] With his new suit and alias, he battled Ms. Marvel and the Avengers across New York. He was eventually defeated and was unmasked revealing his true identity, which prompted the Avengers to question their own and S.H.I.E.L.D.'s security.[3]

His current whereabouts are unknown.

Like this? Let us know!
Retrieved from "https://marvel.fandom.com/wiki/Geoffrey_Ballard_(Earth-616)?oldid=5557521"
Community content is available under CC-BY-SA unless otherwise noted.