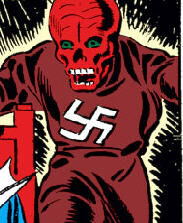 George Maxon betrayed his country by joining the Nazi Party. Adolf Hitler offered Maxon a position as minister of all American industry upon a successful takeover of the country by Nazis. Posing as the Red Skull, Maxon sabotaged the very planes he sold to the U.S. Military while also attempting to assassinate key member of the U.S. Military. He became known for having a "look of death", a false hypnotizing killer gaze, which was in reality a poison injected through a hypodermic needle. He used the disbelief in his existence as the Red Skull to his benefit. Maxon's murders attracted the attention of Captain America and Bucky after, as the Skull, Maxon murdered Major Croy.

Maxon survived and escaped capture. Maxon continued to operate as the Red Skull. Developing a "touch of death" (utilizing a lethal jolt of electricity), he began targeting military officials again. First, he slayed Major Douglas, stealing his plans for a power drill. Using the plans to construct the power drill, Maxon launched an attack on New York City. Seeking out Captain America and Bucky, Maxon instead captured impostors attempting to cash in on the heroes' popularity at a carnival. Maxon hanged the impostors. Believing his enemies to be dead, Maxon was caught off guard when the real Captain America and Bucky arrived. Attempting to escape in his power drill, the Red Skull tossed a bomb at the two heroes. Cap redirected the bomb back at the power drill, destroying it in a powerful explosion and seemingly killing Maxon in the process.[3]

When the real Red Skull began to menace Captain America and Bucky, it was revealed that Maxon was merely a pawn posing as the Skull.[4][5]

Maxon originally used a hypodermic needle filled with lethal poison to facilitate his "look of death". However, he later developed a "touch of death" by means of fatally shocking his enemies through his costume. He occasionally used guns and bombs.

Maxon had his own power drill, a train like device that could bore through the Earth at high speeds.

George Maxon's Red Skull is the prototype to Lex Luthor's Green Skull--both being businessmen and American traitors working with the Nazis.

Like this? Let us know!
Retrieved from "https://marvel.fandom.com/wiki/George_Maxon_(Earth-616)?oldid=6441887"
Community content is available under CC-BY-SA unless otherwise noted.