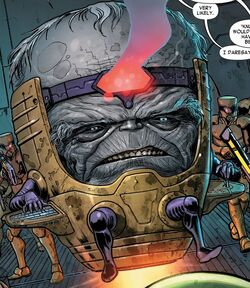 M.O.D.O.K.'s history is presumably similar to his Earth-616 counterpart's up to an unknown moment in time.

When a terrorist group set off nuclear weapons in Washington, D.C. and Moscow, triggering a nuclear war that wiped out 60% of the human race, M.O.D.O.K. and A.I.M. kidnapped humans who were mutated by different kinds of radiation in order to rebuild civilization. One of these humans was the Hulk. Hulk was kept subdued using a virtually reality program. Many decades went by, and M.O.D.O.K. eventually forgot all about Hulk. When the VR program broke down, the Hulk got free and fought off the A.I.M. agents that tried to subdue him until M.O.D.O.K. appeared and explained the situation to Hulk. When Hulk expressed doubt about M.O.D.O.K.'s story, M.O.D.O.K. let Hulk leave A.I.M.'s base to see the ruins of Los Angeles to make him realize that he was telling the truth. M.O.D.O.K. then asked Hulk to help him rebuild humankind, but Hulk refused and left to explore the ruined world.[1]

Years later, Banner became the Maestro and forced the Pantheon to fire missiles at A.I.M.'s base as revenge for the years the organization kept him in stasis. M.O.D.O.K. was accepting of his end and stated that ironically he and A.I.M. had become the Avengers. M.O.D.O.K. presumably died when the missiles struck.[2]

Seemingly those of the George Tarleton of Earth-616.

Seemingly those of the George Tarleton of Earth-616.

Like this? Let us know!
Retrieved from "https://marvel.fandom.com/wiki/George_Tarleton_(Earth-9200)?oldid=6470285"
Community content is available under CC-BY-SA unless otherwise noted.