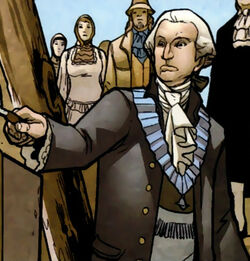 George Washington was a Founding Father of the United States of America and it's first President. He served as commander-in-chief of the Continental Army during the American Revolutionary War.

Washington along with the other Founding Fathers began the American War of Independence from between Great Britain declared themselves the independent United States of America.[1]

During this period, while out riding in the woods, Washington was startled by a bright flash of light signalling the arrival of Willy Lumpkin, a mailman from the modern era. This led to Washington being captured by British troops and threatened to alter history. Mister Fantastic and Human Torch of the modern era's Fantastic Four traveled back in time and helped free Washington, insuring the United States won its independence.[2]

On July 2, 1776, the Continental Congress formally voted for independence, and issued its Declaration on July 4. The Founding Fathers together with several other key players of their time, structured the democratic government of the American Republic. Skrull subversives arrived and plant to make alterations to the constitution but was stopped by the time travelling Fantastic Four[3]

Shortly before the end of the Revolutionary War, Washington was approached by a group of British redcoats who offered him jewels in the hopes that he would choose to become a monarch instead of a president. Washington refused to form another monarchy in the United States and rejected the redcoats offer of allegiance, although he apparently kept the gifted jewels as they remained in the United States property until the 1940s.[5]

On September 18, 1793, President Washington was astonished to see Atlas looming in the distance while he consecrated the first stone of the capital building in the District of Columbia (which was later named Washington, D.C. after the first president).[6]

After his death, George Washington went to Hell, because he had messed around on his wife.[7]

His body was later used by Zahgurim to visit Hellstorm on Earth.[7]

Like this? Let us know!
Retrieved from "https://marvel.fandom.com/wiki/George_Washington_(Earth-616)?oldid=5994541"
Community content is available under CC-BY-SA unless otherwise noted.