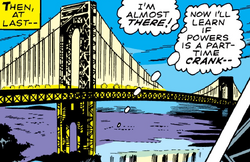 I had no idea what I was really witnessing that day... I didn't know that I was meant to die on that bridge. That the story of every Gwen Stacy ended there. But not hers. And not mine. That stupid bridge. So many awful things have happened in its shadow. So many of us had fallen there. But no one had ever jumped.

Spans the Hudson River from Manhattan to New Jersey.

The George Washington Bridge was damaged by the Sub-Mariner during his rampage through New York City in summer of 1940. He was prevented from completely demolishing the bridge by the Human Torch, who used his flame powers to send the Sub-Mariner fleeing into the Hudson River below.[3]

Daredevil arrived at the center of the Bridge to check out Jonathan Powers' announcement to reveal his secret identity and got into a scuffle with him. Making it seem as though Daredevil was trying to kill him, Powers then forced Daredevil to knock him off the bridge, where he secretly escaped aboard a submarine. With the body of Powers "lost", Daredevil was accused of murder and he fled the scene.[4]

The Green Goblin killed Gwen Stacy by tossing her off the top of one of the towers, her neck having snapped when Spider-Man tried to save her.[5]


The George Washington Bridge was reportidly rebuilt by Damage Control in a day, after city spent months trying to.[6]

Like this? Let us know!
Retrieved from "https://marvel.fandom.com/wiki/George_Washington_Bridge_(Location)?oldid=5860196"
Community content is available under CC-BY-SA unless otherwise noted.