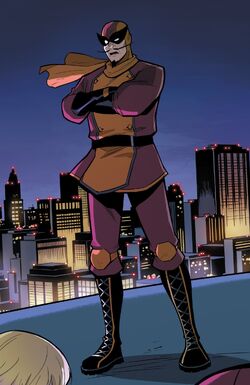 ... Let's see what your power is against a master of LA SAVATE!

Georges Batroc was born and raised in Marseilles, France, when he was old enough he joined the French Foreign Legion. He soon left and became a mercenary, gaining the nickname "Batroc the Leaper" due to his specialty in savate (also known as "La Boxe Française"), a form of French kickboxing.[3]

Now a mercenary he was hired by THEM to steal the Inferno 42 cylinder. This is when he first fought Captain America during this mission. When Batroc introduced himself with typical bluster, Cap revealed, to Batroc's delight, that he had already heard of the mercenary.[3][4]

Later, he was hired by Hydra to abduct Sharon Carter. He lured Cap into a trap, in which he insisted Hydra not intervene, and again lost; however, when Hydra agents prepared to kill both Cap and Batroc, Batroc, incensed at such "men wizout honair," switched sides to help Cap against Hydra.[5]

He sometimes works by himself, and sometimes employing helpers referred to as Batroc's Brigade. The first Batroc's Brigade were the Swordsman and the Living Laser, hired by an undisclosed power to locate and obtain the "seismo-bomb".[6] The second Batroc's Brigade consisted of Batroc, the Porcupine, and Whirlwind, hired by the Hood to attack Captain America.[7]

Batroc and his Brigade teamed up to battle Cap again.[8] However it turned out it wasn't the Stranger, but Jakar who had contracted the Leaper to abduct children. He wanted to use their life energy to bring his people out of a species wide paralytic coma. Cap convinced Jakar that his wife would despise him for using innocent lives to save her.[9]

When Iron Fist tried to clear his name with Joy Meachum, she still will not believe him, and her Uncle Ward has him attacked by his latest paid assassin: Batroc. Batroc has an army of assassins to try and defeat Iron Fist, however Daniel is able to hold them at bay, and eventually defeat them all.[10] Batroc angrily left the Meachum building over a dispute about his payment.[11]

Having discovered a creature from another dimension, Batroc attempted to steal transuranium, but was stopped by Captain America and Spider-Man.[12]

Batroc later joined a villainous version of the Defenders.[13] They committed crimes to tarnish their name, but they were defeated by the actual Defenders.[14]

He teamed up with Mr. Hyde to commit crimes throughout New York. This lead to a conflict again with Cap. Mr. Hyde threatened to kill thousands of people.[15] Batroc showed again that there was a line he would not cross. He and Cap teamed up to take down Mr. Hyde.[16]

Batroc joined the Lethal Legion led by the Porcupine. They were involved in a huge, pointless brawl with a group of random superheroes. What they actually wanted, if anything, is unclear.[17]

The next iteration of Batroc's Brigade were Batroc, Zaran, and Machete, formed by Batroc to steal Captain America's shield.[18]

Trick Shot then hired Batroc and his Brigade to take out the Avenger Hawkeye.[19]

Batroc was next employed by the Kingpin, who was attempting to gain a business foothold in Europe. His cadre to spearhead the operation included Batroc, Rapido, the assassin Snakebite, and wheelman Chauffard.

This team was tasked with assassinating key European crime leaders to create a vacuum for the Kingpin to fill. During the assignment they repeatedly clashed with the Punisher and his ally Morgan Sinclair. But the mercs were generally successful and kept ahead of the opposition.

During this campaign, Batroc went for Castle. He caught up with the Punisher’s Jaguar convertible on a stolen motorbike, leapt from the bike into the Jaguar and beat the Punisher up. While he had the upper hand, Batroc was defeated when Sinclair stomped on the brake at a critical moment, ejecting him from the car.

The Punisher gathered more allies including the South American criminal Tarantula. Batroc wanted to duel him. Batroc disguised himself as a security guard during a London operation, and did get his solo shot at Alvarez. Batroc dominated the fight and won, but he was hit by one of Tarantula’s poisoned spikes, and had to run away to find an antidote.[21]

Cap disguised as "Crossbones" ran into Batroc, who reminded him of an old wager that Crossbones could defeat any five men in unarmed combat. Cap accepted the challenge to avoid suspicion and in front of an audience filled with super-villains.[22] When Cap refused to let Batroc defeat him, "Crossbones" was revealed to the audience as Captain America.[23] However Batroc and the criminals were defeated.[24]

Batroc numbered among the many who mourned the "death" of Captain America, tearfully declaring "I will miss you, mon ami" out of respect for a brother warrior.[25]

While the heroes were away fighting the Secret Wars, New York Police Department faced many supervillains, including Batroc.[26]

When the Justice League came to the Marvel Universe; Batroc briefly confronted Batman when he was one of the villains recruited by Krona for his army.[27]

Batroc has a daughter who teamed up with the daughter of similar B-List supervillain Tarantula. Both daughters adopted their fathers' respective costumes and titles. Taskmaster expressed his shock that Tarantula and Batroc were heterosexual before soundly beating the two villains' offspring, tossing them effortlessly off of a building, noting that he also "hates ethnic stereotypes."[28]

Batroc was among the villains hired by Wallace Klaw for his invasion of Wakanda.[29]

While the Rhino, the Black Knight, Klaw, and Nigandan troops were battling on the frontline, Batroc and Klaw targeted Queen Mother Ramonda in her personal apartments.[30]

Taking her as hostage, Klaw intended to force T'Challa to commit suicide, but the Black Panther S'Yan and a couple of Dora Milaje intervened and the two groups fought. While Klaw was in Cyberspace, Batroc was beaten and tied up. After Klaw's death, Batroc remained in T'Challa's custody, wounded.[31]

Grasshopper came across Batroc's Brigade breaking into the building and decided to try and stop them. The Great Lakes Avengers rush to aid Grasshopper with the robbery and ask him to join the team, Grasshopper accepts shortly before Zaran throws a dagger at his head.[32] They tried to stop the Brigade with little results.[33]

Shocker and Batroc's Brigade planed a heist but were forced to fight the Thunderbolts.[34] He was later recruited into their ranks.[2]

Batroc travelled to London to try and convince Zaran and Machete to leave R.A.I.D., as he was against causing massive civilian casualties. The villains, however, would not listen to reason. Batroc was then approached by Union Jack who was seeking Batroc's friends in the hopes of stopping R.A.I.D. before it was too late. Batroc escaped, but did leave his cell phone behind with Zaran's number in it for the hero to find. Union Jack used this to track the position of the mercenaries and prevented the assassination of the British Houses of Parliament.[1]

Batroc returned to his mercenary confronting new Captain America, Bucky while on a job to steal from the United Nations.[35] He later worked with The Man with No Face, a man from Cap's past.[36] Batroc stole the original Human Torch's remains for reverse engineering.[37]

Batroc's Brigade later attacked a technology expo in Madripoor, but Iron Man and Cap were there to stop them.[38]

Batroc later battled Deadpool when he was working for Daniel Gump, a mob boss with powers derived from having sold his soul to Vetis, as the Merc with a Mouth was being blackmailed by said demon to kill those who had made pacts with him. Deadpool broke Batroc's leg.[39] Because of this, Batroc held a grudge towards Wilson, and was one of the criminals contacted by Gorman, a corrupt S.H.I.E.L.D. agent who also wanted to kill Deadpool.[40] Batroc confronted Deadpool, but he quickly incapacitated Batroc and promised to kill him the next time they crossed paths.[41] Batroc later came across Deadpool in a subway, but got out alive because Wilson was under the control of his pacifist persona, Zenpool, at the time.[42]

When All-New Captain America Sam Wilson, with Steve Rogers' son Nomad, came to Ecuador's Hydra base to neutralize it, Batroc was defending a machine that was absorbing the blood of an unknown boy. Wilson and Nomad engaged the mercenary to save the kid, with Georges almost defeating Cap. When Batroc was going to kill Sam Wilson, Ian Zola arrived and hit him with his Horde Crusher causing his fall, apparently killing the Leaper.[43]

Having survived the fall, Batroc reappeared to take revenge on Ian for trying to kill him when he and Wilson were heading to France to thwart Hydra's plan to spread the Lucas' (the Inhuman boy that Cap and Nomad saved from Batroc) blood, which contains an toxin capable of sterilizing human beings, upon the world.[44] Batroc was thrown out of the Hydra base they were in by Ian, falling to his death once again.[45]

Having survive his encounter with Captain America, Batroc started working as a mercenary for an organization named M.O.D.O.K. (Mercenary Organization Dedicated Only to Killing), led by the villain of the same name. He was one of M.O.D.O.K.'s elite operatives, together with chemist Mega Tony and sorceress Terrible Eye. Batroc was the first member of M.O.D.O.K. to find out their newest recruit, Gwen Poole had actually no skills or powers whatsoever.[46] He was going to tell on her, but she convinced not to, so he instead helped her train.[47]

Shortly after Gwen overthrew their boss and became leader of M.O.D.O.K.,[48] Batroc and the other elite members were kidnapped by an army of Teuthidans. The aliens had invaded Earth looking for Gwen, who had allegedly killed a platoon of their soldiers, a mission she had actually taken the credit for. M.O.D.O.K's benefactor, Vincent Doonan, even assisted the aliens in kidnapping Gwen's allies for leverage. He believed Gwen's plan to deal with the invasion was too irresponsible and chaotic, and believing forcing Gwen to surrender to the Teuthidans was a much more peaceful option.[49]

Gwen managed to defeat the Teuthidans and rescue her friends at the cost of M.O.D.O.K.'s mobile base. With the base and its equipment lost, and any ties with their backer surely cut, Batroc, Terrible Eye, and Mega Tony decided to dissolve M.O.D.O.K. and part their own ways, much to Gwen's dismay.[50]

Disguised as a father and daughter to get inside, Batroc and Gwen broke into Chance's flying casino to steal money, with Gwen holding back the comic sound effects so Batroc could kick down the vault door. Though they escaped with the gold bars, Gwen intended to become a supervillain so her comic run could survive, but Batroc noted he had specifically chosen a job to rob a villain, meaning her share could help her be a hero. Believing herself unable to be a hero nor villain and that her story was ending, Gwen parted ways with Batroc, telling him that future writers would not remember to write him as she knew him. [51] Batroc later reunited with Gwen and the rest of the former M.O.D.O.K. agents in anticipation for M.O.D.O.K. Superior's return to Earth. He swore revenge upon them only for their collective might to scare him off. [52]

Near-Superhuman Conditioning: Batroc has no superhuman powers; however, he constantly pushed his own limits with pinnacle of training until he was capable of achieving near-superhuman feats of acrobatics.[53]

Master Martial Artist: Batroc is considered one of the most formidable unarmed combatants in the world. He is proficient in virtually all unarmed combat, and is a master of savate (French kickboxing).[53]

Master Thief: He is an accomplished thief and smuggler with extensive military training.[53]

Weapons Proficient: Batroc is proficient with most conventional weapons, though he rarely uses any.[53]

Batroc is an Olympic level weightlifter and is capable of lifting about 500 lbs.[53][54]

He currently carries a pair of whip-canes, which he uses with great skill.[53]

Like this? Let us know!
Retrieved from "https://marvel.fandom.com/wiki/Georges_Batroc_(Earth-616)?oldid=6474878"
Community content is available under CC-BY-SA unless otherwise noted.