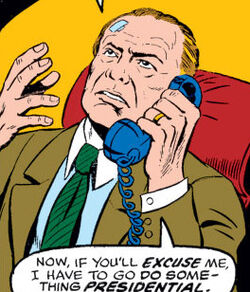 Ford served as the 38th President of the United States of America from August 1974 to January 1977. He replaced Richard Nixon who resigned as President following the Watergate Scandal. To date most of his appearances in Marvel publications should be considered topical references per the Sliding Timescale of Earth-616.

Ford was in the oval office when then president Richard Nixon threatened to shut down the super-hero group known as the First Line to their liason, FBI agent Jacob Scott. This proved to be Nixon's downfall as Scott was secretly the First Line's leader Effigy, who later exposed the Watergate Scandal that led to Nixon's impeachment and Ford's succession as President of the United States. [1]

Ford's body was later accidentally reanimated by SHIELD agent Necromancer along with former presidents Abraham Lincoln, George Washington, Ronald Reagan, Richard Nixon, and both John and John Quincy Adams. These undead presidents ran amok until they were put back to their final rest by mercenary Deadpool and Sorcerer Supreme Doctor Strange. [2]

Like this? Let us know!
Retrieved from "https://marvel.fandom.com/wiki/Gerald_Ford_(Earth-616)?oldid=5484619"
Community content is available under CC-BY-SA unless otherwise noted.