For fictional versions of Gerry Conway as a character within comic books and/or other media,
visit this disambiguation page.
Gerry Conway 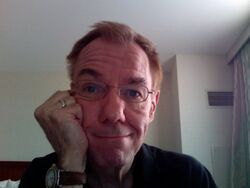 Gerard F. "Gerry" Conway was born September 10, 1952 in Brooklyn, New York City. He is an American writer of comic books and television shows. He is known for co-creating the Marvel Comics' vigilante the Punisher and scripting the death of the character Gwen Stacy during his long run on The Amazing Spider-Man.

Eight issues later, Conway and Andru introduced the Punisher as a conflicted antagonist for Spider-Man, as well as the Jackal. The Punisher went on to become a popular star of numerous comic books and has been adapted into three movies. Conway additionally wrote Fantastic Four, from #133–152 (April 1973 – Nov. 1974).

In 1976, Gerry Conway was replaced with Archie Goodwin as Editor-in-Chief of Marvel Comics.

Like this? Let us know!
Retrieved from "https://marvel.fandom.com/wiki/Gerry_Conway?oldid=6549204"
Community content is available under CC-BY-SA unless otherwise noted.