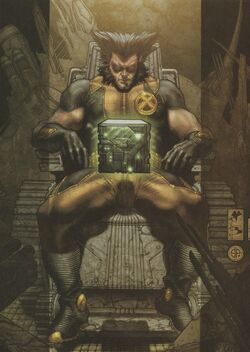 A Ghost Box opens gates between parallel Earths. We figure maybe twenty alternate worlds developed Ghost Box technology. They all look pretty much the same. It's not the only way to travel parallels-- There's Einstein-Rosen bridges. Quantum mirrors-- But we'seen more than a few Ghost Boxes over the years.

The Ghost Boxes are devices used by some people to travel between dimensions.

The Ghost Boxes were discovered on Earth-616 by the S.W.O.R.D. and encountered many times. Abigail Brand stated that possibly twenty realities had developed those technologies.[1]

They were later "discovered" by Forge. They were used by an extradimensional military force composed of Sentinels and a type of mutant with an X-Gene on the 13th chromosome instead of the 23rd.[1] This force intended to annex Earth-616, sending Annex Squads, including Agent X-13, to gather information and open Ghost Boxes.[6]

Forge decided to strike back by engineering artificial mutants to chase Subject X on Earth-616 and invade the hostile time-line.[6]

Although Beast presumably destroyed all life on Earth-89149, by firing into Forge's Ghost Box with a giant laser gun,[6] the current status of the planet itself is unknown, as Forge later resurfaced.[7] Armor stated that the laser could have been firing on a "correspondance-travel reality".[6]

The X-Men were later called by the Black Panther and Mutantes Sans Frontières to Mbangawi where superpowered babies were being born. Cyclops decided to answer the call, hoping for the rebirth of mutantkind after its Decimation.[8]

Beast detected Ghost Box radiation there, theorizing that it was possibly the cause of those mutations. The X-Men were then attacked by The Furies, superhuman-killing cyborgs from an alternate dimension, who were travelling using a Ghost Box.[2]

They also found a man called Jim Jaspers, also from an alternate dimension, who was revealed to be a "living Ghost Box" with not only the ability to travel between universes but also to produce a "Jaspers Warp" effect, similar to his counterpart from Earth-616 and Earth-238.[9]

Thanks to a psychic ruse by Emma Frost, the last Fury used his Ghost box to return to his world and Doctor Joshua N'Dingi executed Jim Jaspers in his sleep to prevent him from warping again and cause more harm to his people.[10]

After The Utopia Exodus and the Schism, Cyclops was abducted by an alternate-universe Storm to be used as a energy source.[11]

On this Earth, Cyclops met Kurt Waggoner, who was aware of the existence and functioning of the Ghost Boxes, claiming to having got an A minus in his class on Quantum Mechanics and Practical Uses of Infinity, and hypothesized that a modified Ghost Box could be present somewhere in the city[12] but was seemingly killed in his research,[4] in fact escaping to Earth-616 with a Ghost Box.[3]

Charles Xavier (Savior) revealed to possess in fact not one but two Ghost Boxes. Kurt returned on the final battle, bringing with him Emma Frost and Storm from Earth-616. Cyclops came back to Earth with Kurt's Ghost Box, now empty of the Earth-12245's data and unresponsive.[3]

It is unclear if Savior's Ghost Box was broken when Armor hit it while punching Savior.

Later, Cyclops' Ghost box was rebuilt by the X-Club, and charged by Dazzler's light energy, opening a portal through which came Kurt Waggoner, Emmeline Frost-Summers, Charles Xavier's head, General James Howlett and the tentacles of an alternate, squid-like Charles Xavier.[5]

The portal was promptly closed, but Dazzler was caught by the tentacles and thrown with the X-Treme X-Men into another dimension.[5]

The Ghost Boxes seem to be teleportation devices principally used to teleport people (and also Sentinels between alternate Earths.

The full extent of Ghost Box use is unknown.

According to Beast[6] and an alternate Cyclops,[13] the excessive use of Ghost Boxes caused the time stream to become too fluid and the world on which they are used "toxic for the mind and the body". This is the reason why people from Earth-89149 needed to invade other dimensions.[6]

Beast later stated that the open Ghost Boxes emit particular radiations and particles that may not be exclusive to the Ghost Boxes but produced by any means of transuniversal travel. It seems that Jim Jaspers' "living Ghost box" powers were accompanied with a Jaspers Warp effect, causing unborn children in the contaminated environment to became Warpies: Uncontrolled, unstable superpowered babies (some of them explosive), and with very few of them reaching to maturity.[14]

It is unknown if both Jaspers Warp effects and physical and mental toxicity of Earth-89149 are linked to those particular radiations and particles common to the two transportation means (as it is also unknown if the Jaspers Warp and The Ghost box are linked beyond their powers and particles emission). Also, it is not known if it was those common radiations who caused the Xenogenesis.

Savior modified his Ghost box, allowing him to consume an alternate reality to power the device that allowed his earth to exist.[3]

The appearance of the boxes and their powers seems to vary a little but follow this standard: Cubic structure opening gates between parallels earths.

It was stated by Abigail Brand of the S.W.O.R.D. that maybe twenty Earths had developed such technology.[1] As far as we know, those realities have somehow acquired or developed the Ghost Boxes technology[6]:

Retrieved from "https://marvel.fandom.com/wiki/Ghost_Boxes?oldid=5767315"
Community content is available under CC-BY-SA unless otherwise noted.