Long ago, he made a deal to save those he loved.

You can't live in fear

Long ago, the devil Mephistopheles ordered his agent on Earth, the Ghost Rider, to retrieve the Contract of San Venganza, an artifact he would use to bring Hell to Earth. Realizing what his master would do with the item, the Ghost Rider refused to hand it over to him and hid it.

Over a century later, Mephisto sought out teenager Johnny Blaze, a motorcycle daredevil following in his father Barton's footsteps. In exchange for his soul, Mephisto would cure Johnny's father of his cancer. While Mephisto does hold up his end of the bargain, he later has Barton Blaze killed in an accident while performing a stunt. Johnny, enraged that the demon would go back on their deal, meets Mephistopheles at a crossroads. The Devil tells Johnny that he now belongs to him, and orders him to leave his family, friends, and loved ones (including his girlfriend Roxanne).

Now an adult, Johnny is a very famous stuntman, worrying his team by pulling off increasingly dangerous stunts. Johnny knows he will never die despite the danger due to his contract with Mephisto. At an event on the anniversary of his father's death, Johnny reunites with Roxanne, now a reporter for the Channel 3 News, and organizes a date with her. Mephistopheles, however, shows up and turns Johnny into his new Ghost Rider. He then orders Johnny to stop his wayward son Blackheart from retrieving the Contract of San Venganza for himself, and in return Mephisto would give him back his soul. He rides to a train station where a cemetery used to be, transforms into the Ghost Rider, and faces Blackheart and his minions. Although Blackheart gets away, the Ghost Rider kills one of his minions, an earth-elemental named Gressil, in the fight. Afterwards, he rides through the city, saving a teenage girl from a mugger using his Penance Stare.

The next morning, Johnny wakes up in a cemetery, where the caretaker tells him the story of the Ghost Rider and the Contract of San Venganza. He then returns home, where Roxanne confronts him on standing her up. Johnny confesses to her that he was working for the Devil, but she doesn't believe him and storms out. He follows after her only to be arrested on suspicion for the crimes Blackheart committed the previous night. While in holding, a group of thugs attack Johnny, causing him to transform into the Ghost Rider. As he breaks out of jail, Blackheart realizes the Ghost Rider is looking for him again, and sends Abigor, a wind-elemental, to stop him. Johnny successfully evades the police, kills Abigor, and escapes to the cemetery, where the caretaker tells him about his predecessor, Carter Slade, and how he hid the Contract of San Venganza.

Johnny returns home again, only to find that Blackheart has killed his friend Mack and kidnapped Roxanne. He then hurries back to the cemetery, where the caretaker reveals the Contract of San Venganza, which was hidden in his shovel. He then gets on a horse and transforms into a Ghost Rider, revealing he is Carter Slade. The two Ghost Riders ride to the ghost town of San Venganza to stop Blackheart, but Carter Slade only makes it to the town's outskirts before giving Johnny his shotgun and riding off. Johnny rides into San Venganza, passing through a swamp where he fights the water-elemental Wallow. After a brief fight between the Ghost Rider and Blackheart, Blackheart gets his hands on the Contract, and absorbs the 1000 corrupt souls the item provides him. Now calling himself "Legion," Blackheart easily takes out Ghost Rider, almost killing him if not for Roxanne intervening with Slade's shotgun. She tosses the gun to Johnny, who infuses the weapon with his hellish power. He shoots Blackheart point black, causing the demon's form to separate into thousands of pieces. As he reconstitutes himself, Johnny uses his Penance State to burn the 1000 souls Blackheart absorbed from the Contract, finishing him. Mephistopheles returns to give Johnny back his soul, but he refuses, vowing to use his powers to stop Mephisto whenever he harms the innocent. Mephisto promises to make Johnny pay for this, and disappears with Blackheart's body. Johnny and Roxanne share one final kiss before he rides off into the sunset.

Rebel Wilson also makes a brief appearance as a teenager the Ghost Rider saves from a mugger. 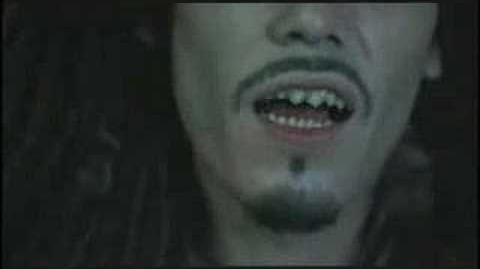 Retrieved from "https://marvel.fandom.com/wiki/Ghost_Rider_(film)?oldid=5874328"
Community content is available under CC-BY-SA unless otherwise noted.